Righteous Kill (Overture, 9.12) — a.k.a, the new DePac — “may not be dead on arrival after all,” a Manhattan media friend wrote yesterday. “I attended the New York premiere and despite the hassle of being forced into an overflow screening room across the street from the Zeigfeld, the film played fairly well in a non-industry room of 100 or so. 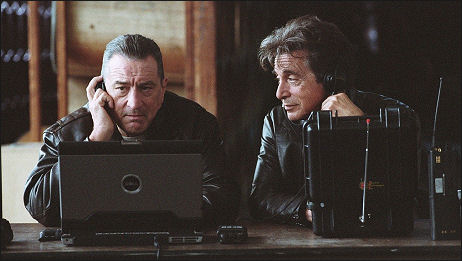 “I honestly don’t know why [Overture hasn’t shown] this until two days before the release date. It’s fun to see these two guys. The script gives them plenty of eye-rolling moments, and it’s obvious DeNiro took Pacino into a private trailer and said ‘If you do the hoo-hah guy in this thing I’m walking off the movie.’
“But that said, it’s a fairly mediocre thriller with two amazing guys. And that’s worth the price of admission simply because they will probably never do it again. The film does have one trick up its sleeve that I thought worked pretty well, But once it’s revealed the thing goes on too long.
I was asked yesterday by a journo friend about DeNiro and Pacino’s diminished leading-man, tough-guy cred. I didn’t have any hot info so I just spewed opinion.
“The bottom line is that they’re both well past their leading man days — DeNiro is 65, Pacino is 68 — and nobody wants to see a movie about a couple of grandpa-aged urban detectives. 13 years ago they were beautiful in Heat — lean and muscular and in their middle-aged prime with great haircuts. Today they’re softer, grayer, saggier…less cool. It’s a hard pill to swallow, but they’re just not top-dog machismo types any more. It’s over.
“But of course, they knew this going in when they signed to make Righteous Kill. Producer Avi Lerner is an older, behind-the-curve rug-merchant producer in the Golan-Globus tradition and was willing to pay them their fees, so they said ‘sure, why not? How can we lose?'”