The deranged smear jobs that have characterized the McCain campaign’s anti-Obama ads — misleading or shamelessly false, aimed at the dopes — bear the stamp of Steve Schmidt, a protege of former George Bush operative Karl Rove. And Rove was a protege of the late and infamous Lee Atwater, the godfather of the right-wing culture-war smear and arguably one of the most demonic mentalities to exert a profound influence upon the American political process.

And yet Stefan Forbes‘ Boogie Man, a portrait of Atwater’s life and career which I saw last summer at the L.A. Film Festival, is, believe it or not, not a smear job. It doesn’t sidestep the facts and doesn’t blink at the hard stuff, but it’s relatively fair-minded. Call me left-biased, but it seems to bend over backwards to give Atwater a fair shake. Really.
InterPositive Media will be releasing Boogie Man this Friday (9.26) in New York and Washington, D.C. and in L.A. on Friday, 10.3, at the Sunset 5. The idea is to open in about 20 additional markets “immediately thereafter,” says a release.
Consider this 9.19.08 N.Y. Times piece by Eleanor Randolph called “The Political Legacy of Baaad Boy Atwater”:
“For all the nastiness of this year’s presidential campaign, the downward spiral into ever-meaner electioneering really started about 20 years ago,” she begins. “The political Magus who ushered in our new muddier era was Lee Atwater, best known for engineering George H.W. Bush‘s win in 1988. Mr. Atwater became such a mythic figure in American politics that he was praised at his funeral in 1991 for being Machiavellian ‘in the very best sense of the word.’
“As many Democratic victims could attest, Mr. Atwater was Machiavellian in the actual sense of the word. Boogie Man, a new film by Stefan Forbes, details Mr. Atwater’s impish, strangely seductive charm, his mean boogie guitar and mostly his political chicanery. A lot of the latter sounds very familiar to anyone following the 2008 campaign.

“For starters, Mr. Atwater knew how to seduce the news media. He could wink and laugh and drop a fake story on the best of them. Lee Bandy, a respected political journalist for The State newspaper in South Carolina, recalled the time that he accidentally helped one of Mr. Atwater’s candidates, former Gov. Ronald Reagan of California. Later, Mr. Bandy recalled that ‘Lee laughed and said, ‘Bandy, you got used.’
“Using the news media apparently was not the hard part for Mr. Atwater. The real trick was finding the way to get inside peoples’ heads.
“One of the cruelest examples of this maneuver involved former State Senator Tom Turnipseed, a South Carolina Democrat who ran unsuccessfully for Congress in 1980. As a youth, Mr. Turnipseed had shock therapy for depression, which he talked about on occasion.
“Mr. Atwater, who was working for the Republican, was not sympathetic. He went around the state telling people that the Democratic candidate had once ‘been hooked up to jumper cables.’ No matter how much Mr. Turnipseed talked about education or crime or dirty tricks after that, voters only saw the jumper cables.
“For the 1988 campaign to elect then-Vice President Bush, the indelible image that helped defeat Gov. Michael Dukakis of Massachusetts was a black man named Willie Horton. Willie Horton committed rape while on furlough from a Massachusetts prison under a program that was actually started by another governor, a Republican. 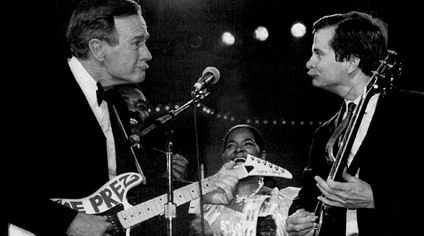 “Despite his public denials that he had anything to do with an anti-Dukakis commercial featuring Mr. Horton, this film has Mr. Atwater encouraging an outside group to spread the word. The tactic worked. Mr. Atwater and friends managed to turn Willie Horton’s face into the only thing some voters could remember about the Democratic nominee.
“Struck with brain cancer in 1990, Mr. Atwater began to repent. He apologized to Mr. Dukakis and Mr. Turnipseed, among others. He tried to get his former acolytes, like Karl Rove, to back off. But, by then, it was too late.
“Many of today’s third-party ads like the Swift Boat attacks that helped defeat Senator John Kerry in 2004 are linear descendants of the Willie Horton campaign. A supposed slip of the tongue that in fact gets some truly nasty tidbit on the record — that tactic is straight from the Atwater manual. As are nasty blog items, quickly denied by candidates who know full well that their supporters are behind them.
“These tricks contribute to voter apathy. They destroy good people. They make it harder for candidates and their families to brave the campaign trail. But too many of today’s political strategists forget Mr. Atwater’s final appeal. They are out there looking for something else — more jumper cables.”