I didn’t finish the Religulous piece until 2:55 pm, sitting here at my usual table at Starbucks under the Cineplex Odeo cinemas. I then flew upstairs to theatre #8, trying like hell to catch the 3 pm screening of Darren Aranofsky‘s The Wrestler, only to be told sorry, no room at the inn, all seats taken. 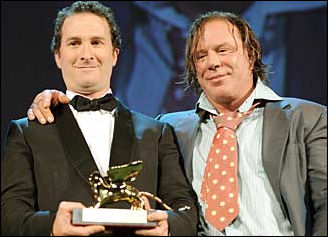 Obviously a Mickey Rourke sartorial advertisement pointing to his uniqueness as an actor and human being, but where did he buy that amazing tie? When did they ever make ties that short?

The winner of the Venice Film Festival Golden Lion prize was acquired very early this morning by Fox Searchlight. And here, according to In Contention‘s Kris Tapley, is a bootleg recording of the song that Bruce Springsteen composed and sang for the film.