I had an opening this evening and decided to scoot down to Roy Thomson Hall to see Rod Lurie‘s Nothing But The Truth again. It’s still tight and true, still perfectly acted, still believable at every turn — easily among the best three or four films I’ve seen at TIFF so far. Sorry if this challenges the c.w., but it happens to be true. Washington Post writer Ann Hornaday told me last night that she’s also a fan. 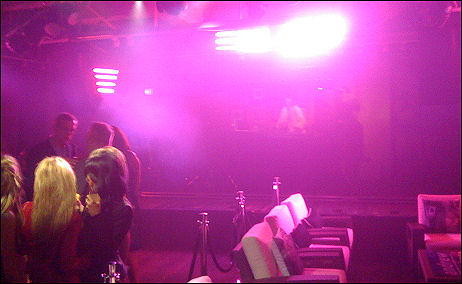 Acute W Lounge hell…sheer torture listening to music from one of worst D.J.’s in the world.

But the after-party, held at the W Lounge on Davenport Street, was nothing but the pits. The music was that special kind of vomitous, head-splitting disco sometimes played at super-loud volume outside the homes of deposed Latin American dictators in order to persuade them to come out and surrender. The amazing and unstoppable Joe Leydon was there. I was in and out within ten minutes. Baah, humbug.