Either you get, agree with and derive enormous delight from dry misanthropic humor…or you don’t. Either way, you certainly can’t argue with the fact that while Joel and Ethan Coen have a lot more up their sleeves than just this, when they’re in the mood to dispense their extremely low opinion of human behavior, they are masters of the form. Nobody knows from dry, diseased and delectably deadpan like these guys. It’s in their bones and their blood. 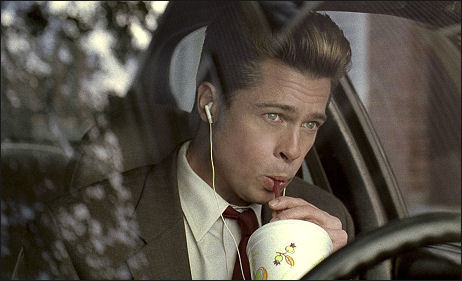 And it’s the genius of Burn After Reading, their latest, to offer another serving in a way that may seem slight or irksome to some, but it is in fact — I mean this — a major satirical meditation about everything that is empty, wanting, sad and hilariously absurd in these united and delusional states of America.
I didn’t laugh all that much, but I loved every minute of this thing. Relished it. I sat there with a bemused smile on my face, chortling every now and then but with all kinds of “yeah, right, exactly, perfect, hah!” stuff happening in my head.
The plot shenanigans are for the popcorn eaters to chew on and the disgruntled critics to bitch about; the meat and marrow of Burn After Reading is contained in the ample and delicious margins. The atmosphere, the asshole-ish line deliveries, the mocking tone, the wacked particulars, and those looks of fear, loneliness, concrete stupidity and desperation. If you look at it this way, the movie is a feast.
If you’re on the misanthrope boat, this half-espionage, half-comedy of modern fools and manners is about as good as this sort of thing gets. But you have to forget about “laughing.” (Which is overrated anyway, despite what Joel McCrea‘s John L. Sullivan might have thought.) Because this movie is about much more than that. 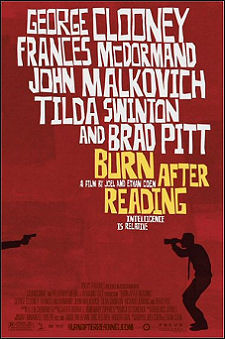 You can sit there and eat your popcorn and take it as a sardonic goofball spy movie crossed with a comedy of errors that doesn’t add up to much, and that’s fine. But the meanest and cruelest jokes aren’t just the funniest, as Mort Sahl once said — they’re also the most thoughtful.
Burn After Reading is not a movie for the ages, but a modest and dead-perfect geiger-counter reading of what ails those desperate, constantly itchy and perturbed Americans in the comfortable urban areas who can’t help but shoot themselves, attack others, make mad lunges at quick money and temporal erotic satisfaction. Prisoners of their swollen egos and limited intelligence. Strivers who must (they feel) have more, who can’t be satisfied or serene, who eat the right foods, belong to health clubs, drink too much, scheme and claw too much and are natural-born comedians in the eyes of God.
Which is how Burn After Reading starts and ends, by the way — from the point of view of a sad, bemused and occasionally chuckling cosmic super-being who exists somewhere above the earth.
That’s all I have time to say because I have to get to a screening of The Appaloosa. I’ll add to this sometime in the late afternnoon. I didn’t even mention the cast — George Clooney, John Malkovich, Brad Pitt, Frances McDomand, Richard Jenkins, J.K. Simmons, David Rasche — or the beautiful note-perfect ending. But them’s the breaks when you’re doing four movies a day plus filing and parties and random chit-chats on the street. 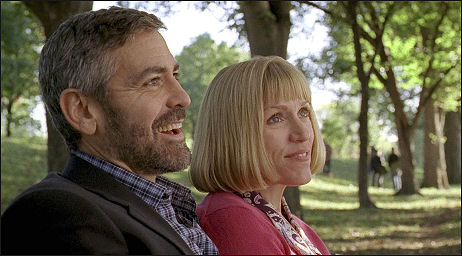