Rourke Has Come Through

The timing of Foundas’s article is a little unusual — a few weeks after The Wrestler was hailed at the Toronto and Venice film festivals, and nearly three months before it’ll open commercially. Obviously Foundas is foresaking the usual considerations to say to the industry, the press and the cognoscenti at large, “This is a major return-to-form performance by an actor who deserves not only respect but accolades — a man who has suffered and wandered in the wilderness for his sins, and has returned with a performance that not only delivers in terms of great chops and emotionality, but which has unmistakable real-life echoes.”
“‘I hated the ’90s…the ’90s fuckin’ sucked,’ says professional wrestler Randy ‘The Ram’ Robinson early on in The Wrestler — and he should know,” Foundas begins. “Over the hill and past his prime — his steroidal body a palimpsest of battle scars, his graying hair dyed a Nordic blond — Robinson hasn’t seen the inside of a major arena for the better part of 20 years. Nowadays, he gets top billing by scraping bottom, trading blows with other used-to-be’s and might-have-beens in school gymnasiums and banquet halls, earning a cut of the door that’s barely enough to cover his trailer-park rent.
“As it happens, the ’90s weren’t much kinder to the actor playing Robinson: Mickey Rourke. By the end of that misbegotten decade, the one-time Hollywood A-lister was living in a $500-a-month studio apartment and subsisting on a meager income generated by the sale of his motorcycle collection plus whatever acting jobs he could scrounge up from the few producers in town who weren’t afraid to hire him. 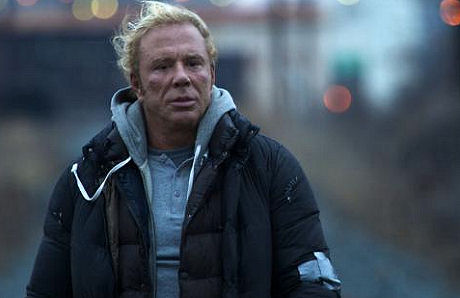 “His flirtation with a boxing career had come to an end. His tabloid-catnip marriage to model Carre Otis had hit the skids. There were reports of arrests and of plastic surgeries gone awry. It was said he had walked off the set of one movie after a producer refused to allow Rourke’s pet chihuahua to appear with him in a scene.
“‘The thing is that I am the one to blame for all that,’ Rourke says as he lights a cigarette in what I’m pretty sure is a nonsmoking suite at the Four Seasons Hotel, the day after The Wrestler‘s North American premiere at the Toronto Film Festival. His chihuahua, Loki, issues a bark from a nearby cushion. ‘I used to blame other people, but I’ve got nobody else to blame except for Mickey Rourke.’
“That’s more or less the same thing Rourke told director Darren Aronofsky (Pi, Requiem for a Dream) when they first met to discuss The Wrestler. Or rather, it was what Aronofsky told him.
“‘He sits down and, for the first five minutes, he tells me how I fucked up my whole career for 15 years behaving like this, and I’m agreeing with everything,’ Rourke recalls. ‘Yes, I did. That’s why I haven’t worked for 15 years, and I’ve been working real hard not to make those mistakes.’ After that, Aronofsky pointed his finger at the actor — something, Rourke says, that not so long ago would have prompted him to say, ‘Don’t do that, okay, buddy?’ — and laid out the ground rules.
“‘He goes, ‘You have to listen to everything I say. You have to do everything I tell you. You can never disrespect me. And you can’t be hanging out at the clubs all night long. And I can’t pay you.’ And I’m thinking, ‘This fucker must be talented, because he’s got a lot of nerve to say that.'”
“Then Aronofsky told Rourke that if he did all of those things, he would get the actor an Oscar nomination. ‘The moment he said that, I believed him,’ says Rourke. ‘The first day of work, I believed him more. The second day of work, I believed him even more.’ As for the finger-pointing, ‘I’m from New York — we point a lot,’ Aronofsky tells me later. ‘Like any good marriage, you want to be as up-front as possible about what the issues are.'”
Sidenote: I’m expecting to see The Wrestler before too long. I got shut out of the big Toronto press screening at 3 pm, and the next day I decided to blow off another Wrestler screening — a public one — so as not to miss a 12 noon press screening Kathryn Bigelow‘s The Hurt Locker. The Toronto Film Festival is full of unfortunate do-or-don’t decisions like this.