For the last few days I’ve been trying to put my finger on why Sarah Palin gives me such a bad case of the creeps. Apart from the long list of negatives and serious doubts that everyone has already brought up, that is. Then it hit me — she’s Martin Sheen‘s Gregg Stillson character in David Cronenberg‘s The Dead Zone (’83). 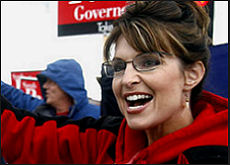 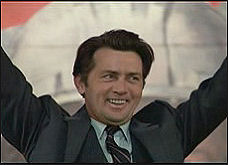 And when that vision came to me I was twitching exactly like Chris Walken‘s Johnny Smith character. McCain dead, Palin making the call…I saw it sharp and clear as if I was watching a snappy movie trailer. It’s the single scariest realistic possibility that real-life and realpolitik have put before the American public in the history of this nation, and a lot of the Walmart moms are going, “Girl’s one of us! A tough mom…yeah!”
This is the way the world ends. Not with a bang, but with an Us magazine cover story and the attendant malignancy of the media, looking to drive up ratings with the hot girl and hot story of the moment.