I’ll never forget the thoughts and feelings that were coursing through my system seven years ago today, starting a little after 9:30 am as I stood inside Bay Bloor Radio, located in the basement of Toronto’s Manulife Center, and watched the unfolding horror on big-screen projection. 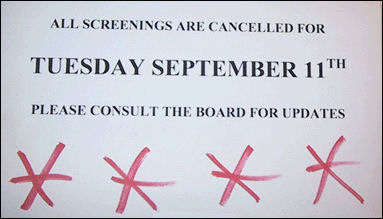 I’ll also never forget my astonished reaction on Wednesday, 9.12, to the decision of Rod Armstrong, my Reel.com editor at the time (and now a San Francisco Film Festival programmer), to downplay what had happened in his summary of my column’s content that day. The most Rod was able to squeeze out was that “recent events” had impacted the Toronto Film Festival.
Rod was one of those “keep the column exclusively focused on movies” type of guys, no matter what. A lot of online editors subscribed to this approach in the old days. But something snapped when I read Armstrong’s words, which seemed to me one of the most titanically chickenshit sidesteps in the history of editorial intros, however discreet and sensitive his intention. All I know is that from that point on my column-writing creed began to be “movies now and always, but how can you ignore the other stuff if it pushes its way into your head as much as this or that great, worthwhile, so-so or godawful film?”
“I seriously doubt if anyone will be interested in reading this morning about the latest hip movies at the Toronto Film Festival,” I wrote on the evening of 9.11.01 while sitting in the apartment of Leora Conway, an old friend and Toronto resident who had graciously put me up that year.
“The wind has been knocked out of [this festival], I can tell you that. Not that anyone cares. Festival director Piers Handling announced the cancellation of some 28 public screenings and 13 press screenings yesterday afternoon. The festival resumes today, but people will mostly be going through the motions. It’s now the Festival of the Walking Numb. Spiritually, it’s all but over.
“Those hundreds (more likely thousands) of bodies lying under the rubble in New York and Washington, D.C., have pulverized everyone’s consciousness, and there just isn’t room to let anyone’s particular cinematic vision of life into our heads. Reality has taken over completely. Reality is all. What happened yesterday was beyond horrific, beyond sadistic, beyond the most spectacular Jerry Bruckheimer CGI fireball. 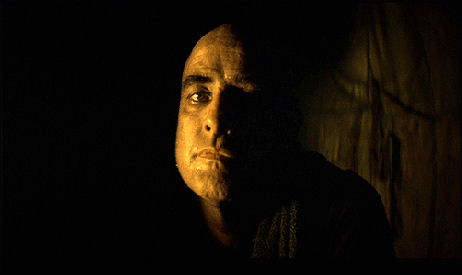 “Commentators and editorialists are saying everywhere that America will never be the same in the wake of those jets smashing into the World Trade Center towers and the Pentagon, and are describing what happened as Pearl Harbor times 10. That’s true in more ways than one.
“Those camcorder shots of the buildings crashing down were terrible but awesome. I watched them over and over yesterday and into the night. We all did, I’m sure. It sounds insensitive to even think this, but one result of that footage is that special-effects companies are going to have to get a lot better very quickly. Because any huge, computer-created explosion in any new movie is suddenly going to look a lot faker. Reality has raised the bar.
“Life is processed with one type of software, and movies with another. We cut movies slack for their occasional lack of verisimilitude while we watch them in the dark, but reality cuts us very little of the same in the cold light of day.
“I was thinking yesterday afternoon of that scene in Apocalypse Now in which Marlon Brando‘s Colonel Kurtz talks about the ‘brilliance … the sheer brilliance’ of the Vietcong having hacked off the arms of several children who’d gotten inoculation shots from American medics. Kurtz obviously respected the psychopaths behind this act, calling them ‘trained cadres … men with families, men filled with love’ who simply ‘had the will to do this.’
“As you listen to Brando go on, you can at least half get what he’s saying. Kurtz is telling us that maybe, just maybe, there can be vestiges of love and noble purpose in the most horrific acts of war. What is the difference between hacking off children’s arms with machetes and slaughtering thousands of innocent office workers in downtown Manhattan and at the Pentagon? Mostly scale, I’d say.”
That last graph was close to what Bill Maher said a few days later on Politically Incorrect (i.e., that the Al Qeada team behind the 9.11 attacks were “not cowards”), which soon after led to his show’s cancellation. But I finished the piece with the following graph, and perhaps saved myself from any possible Reel.com recriminations:
“But who today is even considering for a second that the people behind yesterday’s barbarism are (or were, in the case of those who killed themselves) anything but fiends, and that their motives were anything but twisted and deranged?”