I flew to New York in late September 2001 to attend the New York Film Festival, but the first thing I did when I arrived…well, here’s the piece I wrote:
“I got my first look coming in on the Newark Airport bus at 5:45 A.M., right before we hit the Lincoln Tunnel when you can see most of Manhattan. In the darkness of the downtown area where the World Trade Center used to be, I could see a small (from my perspective) glowing cloud of white smoke, illuminated by the powerful lamps the night crews are using to work by. I decided right then to visit the site that day.
“A few hours later, after dropping off my stuff and grabbing some breakfast, I took the IRT down to Chambers Street. The stop closest to the devastation is Fulton Street, but I wanted to walk around and see it from every angle. The New York cops and the military have the northern end fenced off about four blocks north of the site. But standing at Chambers and looking south, you can see the rubble of the north tower. 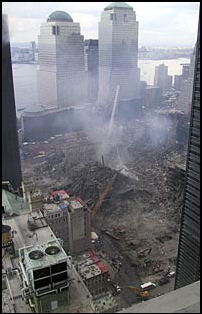 “It’s the color of brownish desert sand, mostly. Standing maybe five or six stories tall, with rubble trailing down from the top. It’s chilling when you first see it. It’s chilling when you’ve been staring at it for a couple of hours.
“I walked to the east and down Broadway, past City Hall and down to Fulton, across the street from a small 18th- or 19th-century church (I’d know the name if I lived here) that’s being used as a gathering and refreshment station for volunteers. I saw a hand-painted banner with the word ‘Courage’ painted on the side. The tourist traffic was a lot heavier here. Cops were telling everyone not to take pictures, so as to keep everything moving. I guy next to me told his friend with a camera about the no-photo rule, and the guy said, ‘This is still America.’
“I walked down to Cedar Street, below Fulton, and turned right toward the barriers, which are about two blocks from the site. You can see the outer shell of the south tower, the highest part of which stands about four stories. Guys were watering the rubble down with huge fire hoses, and constant trails of smoke were wafting out in different places. It looked like the steam you see leaking out in Hot Springs, Arkansas. There were six or seven steam shovels scraping at the ground. It seemed that the more the shovels scraped the surface, the more the residual heat from the September 11 fires seemed to escape.
“A news guy who works for a TV station met me. Our idea was to get inside a certain building (I can’t say too much or I’ll get him into trouble) and then get up to the 30th floor, where we’d get a pretty good view. My friend wasn’t carrying a police pass (they take about nine hours to get, he said) but he had some good press ID, and he managed to bluff us past the cops and the Army guys who were checking credentials.
“We got into the building and after talking our way past some more uniformed security suits in the lobby, made our way up to the 30th floor and looked out. My eyes popped open. Startling, staggering…but I felt strangely glad to be there.
“Some people I’d talked to had told me about the smell. Like burning tires, one publicist said. It smelled vaguely to me like a rock quarry I’d once been to in Connecticut, with that powdery aroma of crushed stones. It also brought back a line in a recent New York Times story about the ‘scent of unquieted souls.'”