I spoke this morning to dp Gordon Willis, a.k.a. the legendary “Prince of Darkness” whose films include the Godfather trio, Alan Pakula‘s All The President’s Men and The Parallax View and Woody Allen‘s Manhattan, Annie Hall and Interiors. We spoke for 20 or 25 minutes, but I could have easily kept this master of light and shadows occupied for three or four hours. 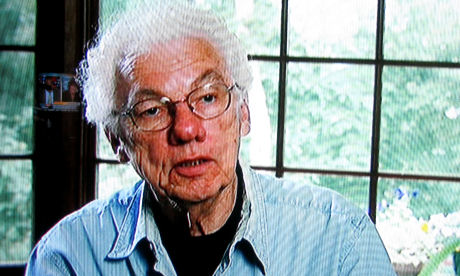 The phoner happened in part because of my somewhat surprised, very positive response to the restored Coppola/Harris Godfather DVD. Even on a crummy DVD, which delivers about 15% of the visual data contained in the Blu-ray version, this classic film, which I’ve probably seen a good 25 or 30 times, looks significantly better. Warmer, yellower, redder, possibly a bit sharper, much inkier blacks and brighter here and there.
I now can’t wait to watch The Godfather, Part II, which Willis seemed especially enthusiastic about during our chat.
Oh, and I love the supplementary docs — Emulsional Rescue (about the work that went into the restoration), Godfather World (about the general cultural lore that the films have created over the last 30-plus years) and a slew of others. As well as the deleted scenes that were put into in The Godfather Saga, which never went to DVD.
Early this morning I called Robert Harris, who supervised the restoration, to convey my complete satisfaction with the regular DVD version, and he reminded me again that I won’t be seeing the restoration until I watch the Blu-ray version on a 46″ or 50″ LCD or Plasma screen. He then offered to put me in touch with Willis, to which I said thanks much. I wound up phoning the blunt-spoken cinematographer sometime around 11 am. 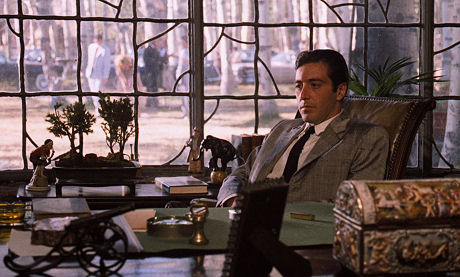 I told Willis about my very first viewing of The Godfather in a theatre in Boston way back when, and particularly how the theatre showed it in 1.33 to 1 instead of 1.85. I was under the impression that the film was intended to be shown this way in order to reflect the standard Academy ratio of the 1940s and early ’50s. I later realized I was wrong about that. Willis told me that the film had been shot with a protected 1.33 to 1 aspect ratio (i.e., a version that was shown on TV for decades). He said that Coppola wanted it to be shown in this aspect ratio and that he answered, “Where do you think that’s going to happen…Russia?”
One of the distinctive differences in the restored Godfather is that the outdoor wedding-party scenes are bleachy looking — flared whites, over-exposed. The way the sunny outdoors might look to a person who’s been sitting in a dark and shuttered room. That was a deliberate choice, of course, although Willis took some heat for it at the time.
I asked Willis if he’s seen David Fincher‘s Zodiac, which is partially set in the late ’60s-early’70s and seems reminiscent of the shooting and lighting style that Willis used on All The President’s Men. No, he said. I asked if he’s seen Children of Men, which I feel is a bona fide classic due to Emmanuel Lubezski‘s action photography. He hasn’t seen that either. He has, however, seen Burn After Reading, “the Brad Pitt movie,” and didn’t think much of it.
Willis can talk technical photography and projection issues until the cows come home, but his primary interest and deep-down concern, to hear him tell it, is with story skills or rather the lack of. The art of storytelling is falling away, very few present-tense filmmakers know how to tell a story, etc. He’s quite a fellow, and I love his occasionally blunt way of putting things. Serious artists rarely use namby-pamby phraseology. Willis is a sterling example of this.