Just when I think I’m finally done with Armond White, he writes something that pulls me back in. Yesterday morning I read his review of Lance Hammer‘s Ballast following the announcement of the Gotham Independent Film Awards nominations, four of which went to Ballast. No one, I had to admit, had come closer to echoing my own thoughts (although my initial reaction last January was to cut Hammer’s film a little more slack). 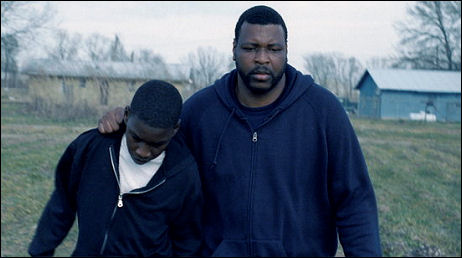 “Director-writer Lance Hammer shows a black Mississippi family torn apart by a double suicide attempt, drugs and alienation,” he writes. “But you have to see through these ludicrous black phantoms to the actual white middle-class fantasies at the film’s core.
“Hammer’s style reveals the relationships and backgrounds piecemeal. Each character is overly taciturn: Mournful adult Lawrence (Michael J. Smith Sr.) routinely says, ‘I don’t care.’ Mother Marlee (Tara Riggs) routinely sighs, ‘Maybe we can figure it out.’ And the unreachable, TV-addicted drug dealer kid (JimMyron Ross) aims a gun to bluff courage.
“If not for Hammer’s neo-realist gimmick, Ballast is conventional storytelling but without the pleasures and richness of conventional storytelling as seen in David Lean or Chen Kaige‘s Together.
“Problem is, Ballast’s totally humorless family saga won’t appeal to the Hollywoodized black audience — they want drama! It’s simply another calling-card movie establishing the director’s credentials.
“This shit has been going on since Reagan (Straight Out of Brooklyn) and Clinton (Fresh). African-American life is imprisoned by the art fallacies of Indie filmmaking, controlled by white liberal condescension. Even Barack Obama would be sick of it.”
Hammer is “a rich kid,” a producer friend told me yesterday. It all fits. Today is the final day to see Ballast at Manhattan’s Film Forum.