In a review posted 45 minutes ago, Variety‘s Derek Elley has given a stiff slap-down to Quantum of Solace, the soon-to-open James Bond flick directed by Marc Forster (Monster’s Ball, Stay), who made his bones as a touchy-feely type. “The shortest and certainly the most action-dense Bond ever, Quantum of Solace plays like an extended footnote to Casino Royale rather than a fully realized stand-alone movie,” he says. 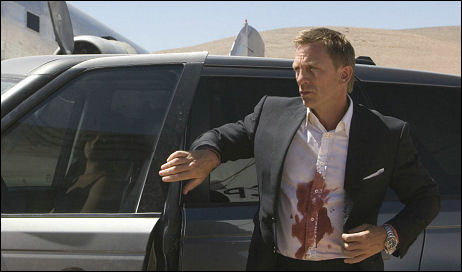 “Producers Michael G. Wilson and Barbara Broccoli, possibly knowing they couldn’t immediately top the previous pic’s sheer stylishness, have radically reshuffled the series’ traditional elements, but also allowed incoming helmer Marc Forster to almost throw the baby out with the bathwater. Played with a cold, mechanical efficiency that recalls the Bourne movies, with almost no downtime or emotional hooks, Quantum will find some solace in beefy initial returns but looks unlikely to find a royale spot in Bond history or fans’ hearts.
“Though pic is the first in the series in which the action follows directly from the previous film, the differences in tone, look and tempo are instantly apparent. As the camera zooms across northern Italy’s Lake Garda to pick out Bond (Daniel Craig) being chased in his Aston Martin by armed villains, it’s clear that the elegance of the franchise that Royale director Martin Campbell resuscitated is already a thing of the past. Even David Arnold‘s music seems to punch the clock rather than elevating the visuals.
“Thanks to his sheer physical prowess, Craig — less muscular this time around, and more panther-like — still manages to make the character look as if he’s in control, even when he’s being hunted by various villains and at least two major spook agencies, and even though seems to have suffered a personality bypass. However, the plot is unengaging: basically a grim series of near-escapes as Bond hunts (but is mostly hunted) between Latin America and Europe.”