I didn’t sense the least amount of coolness from Kristin Scott Thomas during our interview yesterday afternoon at the Four Seasons hotel. She has a bit of that chilly rep with some journalists, in part, I suppose, because of her having played a few bright and particular women in films, but I felt mostly openness and vulnerability. Really. 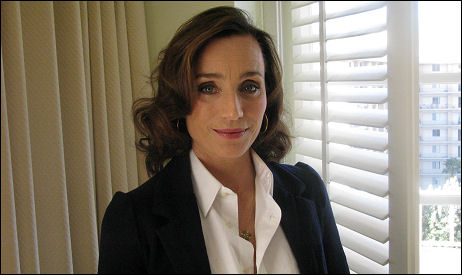 Along with some excitement and fatigue, of course, as she’d flown out from Manhattan (where she’s currently starring in a hot-ticket stage version of The Seagull) to be here only one day. She didn’t throw any pre-recorded or pre-thought out conversation. (Or none that I detected.) She’s obviously very quick, alert and attuned to whatever ‘s happening or coming. Here‘s the mp3.
It seems obvious to me — certainly apparent — that Thomas is in the throes of a second career surge right now. It’s one of those special coagulations that comes from two very hot, deeply admired performances happening at the same time — her Oscar-calibre work in Phillipe Claudel‘s I’ve Loved You So Long (Sony Classics, 10.24) and her highly-praised performance as Arkadina in the Broadway presentation of Anton Chekhov‘s play, which opened on 10.2.
On top of which she’s easily the most admired Best Actress contender among the handicapper crowd at this moment. (Am I wrong? Explain why.) She seems a notch or two ahead of Anne Hathaway in Rachel Getting Married and Melissa Leo‘s widely-praised performance in Frozen River. Nobody’s seen Meryl Streep in Doubt or Kate Winslet in Revolutionary Road, but no matter what happens Scott is in, trust me. 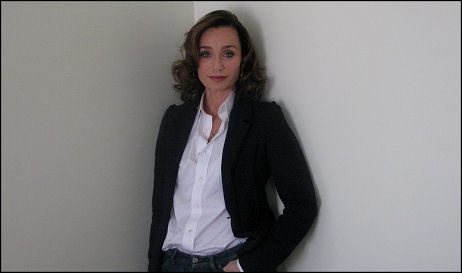 Playing a haunted middle-aged woman just out of prison and struggling to live with the crime that put her there, her ILYSL performance is quiet and subtle and enormously powerful for that. Her work, in fact, reminds me of two of my all-time favorite quiet performances — Steve McQueen‘s in The Sand Pebbles (easily his career best) and Al Pacino in The Godfather, Part II. The kind of performance that draws you in for its lack of flamboyance and modest brushstrokes and delicate indications.
KST’s surge comes seven years after the end of her first streak (’94 to ’01) which began with Four Weddings and a Funeral and eventually included Richard III, The English Patient (her absolute romantic mainstream peak), The Horse Whisperer, Mission Impossible, Random Hearts (an unfortunate momentum stopper for everyone involved) and finally Robert Altman‘s Gosford Park.
Here, again, is the mp3. And here’s a fairly blunt interview-profile (dated June 2007) from the Daily Mail‘s Mark Anstead, and another from the Observer‘s Louise France.