Two days ago the Times Online Paris correspondent Charles Remner reported that Woody Allen‘s Vicky Cristina Barcelona has led the French box-office tallies for the past two weeks. The film hasn’t done badly in the U.S. since opening limited in mid-August (it ranks as 81st among all ’08 attractions) but neither has it been burning up domestic records. 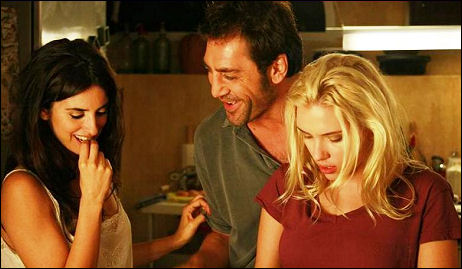 The reason for the French success is that Allen is “adored in France,” Bremner writes. “Annie Hall, Manhattan and the other masterpieces of his oeuvre were a cult in the 1970s but his name is barely known to younger Americans. He has gone on turning out his essays on love and mortality but U.S. filmgoers turned their backs on his more recent efforts. That has been Europe’s gain, with three European-financed films set in London and now his brilliant Spanish outing.
“Allen, now 72, is revered here as un grand auteur. His charm, neurosis and sense of humour touch a Gallic (yes) nerve. The reviewers have mainly raved over Allen’s Spanish opera, calling it dazzling, clever and sublimely melancholic. How is it that an American movie is regarded as a minor art film in its own country but manages to beat out all the native comedies and US blockbusters at the French box-office?”