In Janet Maslin‘s 10.22 N.Y. Times review of Spellbound by Beauty: Alfred Hitchcock and His Leading Ladies (Harmony, 10.28), she paraphrases author Donald Spoto‘s view that “no understanding of the director’s career can be complete without the dark side, and that great art need not correspond with saintly behavior. 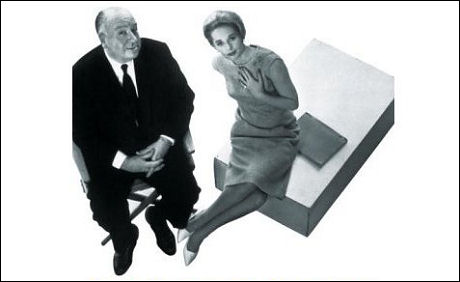 “And [Spoto] suggests that this book be read as ‘a cautionary tale of what can go wrong in any life.’ After all, ‘it is the story of a man so unhappy, so full of self-loathing, so lonely and friendless, that his satisfactions came as much from asserting power as from spinning fantasies and acquiring wealth.’ By the time Hitchcock imploded with Tippi Hedren [during the making of The Birds and Marnie], the craving for such power had stifled the creative vitality of his work.”
It’s absolutely true that Hitchcock’s downslide began right after The Birds (’63) and stayed in a downswirl mode until the end, despite the view in some quarters that he resurged with 1972’s Frenzy. (Has anyone watched this film lately? It’s brave and adventurous with two or three standout sequences, but at the same time much of it is tedious and meandering and seriously lacking in story tension. And certain portions of Anthony Shaffer‘s dialogue are dreadful.)
What Spoto’s book seems to be saying, going by Maslin’s assessment (and I would say this is true in most walks of life), is that if you’re living a life afflicted by sexual or emotional repression sooner or later it’s going to negatively affect your productivity or creativity. This was Hitchcock, all right. By all indications he had no sex life at all for decades. According to Spoto nothing happened with his wife Alma except for one incident. (Good God!) So he poured all his sensual appetites into power, wealth, travel, good food, etc. And quietly lusting after his actresses in differing ways