I happened to turn on Susanne Bier‘s Things We Lost in the Fire on HBO a little while ago, and it got me once again. I’m now more certain than ever that the critics and audiences who turned away from this faintly flawed but deeply moving film really missed the boat. Maybe this’ll hit some of them down the road and they’ll ask themselves, “What was I thinking?” 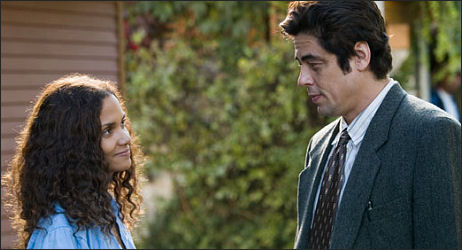 I really like this section from my 10.5.07 review:
“There can be no beating around the bush about Benicio Del Toro‘s performance as Jerry the junkie, a once-successful lawyer who’s slid down into the pit. Over the course of this two-hour film he climbs out of his drug hole, brightens up, chills out and settles in, relapses, almost dies, and then gradually climbs out of it again.
“I’m starting to see this actor (whom his friends and Esquire magazine profilers call ‘Benny’) as almost God-like in the Brando sense of that term. He’s holding bigger mountains in the palm of his hand, right now, than De Niro held in the ’70s and ’80s. He’s one of the top four or five superman actors we have out there. There isn’t a frame of his performance that doesn’t hit some kind of behavioral bulls-eye.
“I’ll tell you this — when journalists who’ve seen Things We Lost in the Fire go ‘I don’t know…meh’ and then say in the same breath that some other so-so film is ‘pretty good’ there’s some kind of virus out there that I don’t want to give a name to.”