The term “kitchen sink cinema” refers to grittily realistic black-and-white British films made in the late ’50s to early ’60s about working-class characters afflicted by despair, banality and a sense of entrapment. I don’t know how many of them were made exactly, but my favorites are John Schlesinger‘s A Kind of Loving, Tony Richardson‘s Look Back in Anger, A Taste of Honey, The Entertainer and The Loneliness of the Long-Distance Runner, Karl Reisz‘s Saturday Night and Sunday Morning and Lindsay Anderson‘s This Sporting Life. What is that, seven? 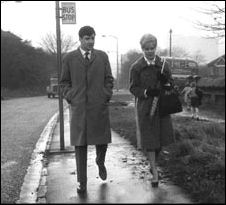 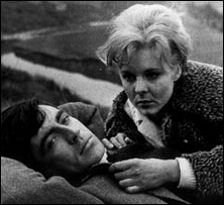 I’ve always thought the term “kitchen sink” had something to do with one of these films having depicted a scene in which one of the protagonists (Alan Bates in A Kind of Loving or Albert Finney in Saturday Night and Sunday Morning) coming home drunk late Saturday night and literally throwing up in the kitchen sink. It may have come from a line Pauline Kael wrote about the genre, but I know I’ve had this image in my head for years. But it just hit me with a start that I can’t remember which actor in which film did the actual vomiting…if in fact it happened in one of these films.

Or is the term “kitchen sink” is in fact “derived from an expressionist painting by John Bratby which contained an image of a kitchen sink”?, as it says on the kitchen-sink Wikipedia page? “The critic David Sylvester wrote an article in 1954 about trends in recent English art, calling his article ‘The Kitchen Sink’ in reference to Bratby’s picture. Sylvester argued that there was a new interest among young painters in domestic scenes, with stress on the banality of life.”