Elia Kazan‘s Viva Zapata (1952) is the only Marlon Brando film that hasn’t been decently mastered for DVD. Why? I love and miss this film. It’s one of Bud’s three golden-era Kazan collaborations, two years before Waterfront and a year after Streetcar. And he’s truly great in the part. Ditto Anthony Quinn and Joseph Wiseman. (I love how Wiseman shouts in a crazy manic stream, “Zapata, in thenameofeverythingwefoughtfor don’t go!”) And Brando’s death scene near the finale (i.e., getting shot 112 times) is a classic of its kind. 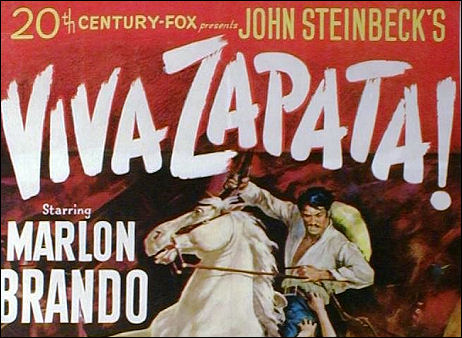 Guillermo del Toro once told me he won’t watch it. “How would you feel,” he said, “if Mexico made a film about Abraham Lincoln starring a Mexican actor, and speaking English-accented Spanish?” He has me there, but the craft, heart and political conviction in Viva Zapata still feel genuine to me. (Even if it’s a little too simplistic and sentimentalized at times.) Kazan was coming to terms with ratting (i.e., confirming names) when he made it, but he was still an old leftie from the ’30s and knew about the emotion behind a rebellion.