“It’s interesting to see how each of the actors exhibit their own distinct variation of portraying gay men,” says a Playlist review of Gus Van Sant‘s Milk (Focus Features, 12.5). “Diego Luna is the most flamboyant, James Franco is understated, and Emile Hirsch is the most precocious. And playing the father figure to these Lost Boys is Sean Penn, who has Milk’s exaggerated podium gestures and Long Island accent down perfectly. 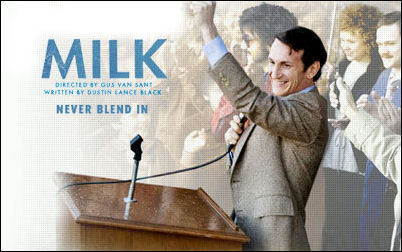 “Penn does a magnificent job of dividing himself in two, as Milk had to also manage, splitting his time and attention between his personal life and his career as a political figure; and on top of that even his career was divided. He was a sidewalk activist who worked for the government and preferred it this way.
“Delivering perhaps the most unexpected performance is Josh Brolin as city supervisor Dan White who murdered both Milk and Mayor Moscone (played by Victor Garber). It is hinted that maybe Dan White was a closet case and jealous of Milk’s freedom. Brolin gives just enough evidence that this might be true before covering it up quickly, hiding it almost too well.
“Brolin’s turn makes you really feel empathy for White and understand the pressure he underwent. He watched Milk succeed in making sure Proposition 6 was not passed, and yet he couldn’t get a simple pay raise.”