Not Supposed To Say

In some of his films director Jonathan Demme has revealed a profound affection for Caribbean culture and music, and occasionally for African-American characters and subject matter. Examples include his two Haiti docs — 1988’s Haiti: Dreams of Democracy and ’03’s The Agronomist. His 1998 adaptation of Toni Morrison‘s Beloved. That Hannibal Lecter-in-the-Bahamas scene at the end of The Silence of the Lambs. The end-credit singing of “Wild Thing” at the close of Demme’s Something Wild by Jamaican singer “Sister” Carol East. 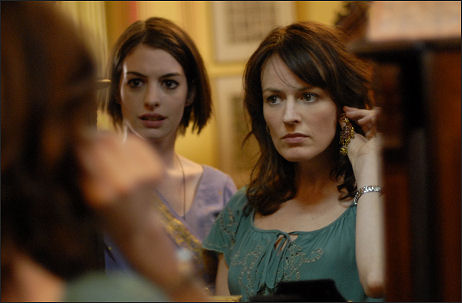 So it feels very Demme-ish that the union that’s endlessly celebrated in Rachel Getting Married, his latest feature, is between a very alabaster lassie (Rosemarie DeWitt, playing Rachel) and a handsome Afrique-ebony guy (musician Tunde Adebimpe, playing Sidney the groom). It’s also a very Demme thing that nobody so much as mentions this.

You can say “well, why would anyone mention it?” and I’d take your point, of course. We all like to see ourselves as color-blind. My point is that in real life someone in the wedding party would at one point or another throw some kind of slider ball — something anecdotal, flip, netural, whatever– into the proceedings. In the same way someone would say “oh, it’s raining” if a cloudburst were to happen. My other point is that such a remark (which wouldn’t necessarily be coarse or gauche ) is verboten in a Demme film because it doesn’t reflect his values or sensibilities.

You may have noticed that movie critics haven’t come within 20 feet of mentioning this in their reviews. That’s because it’s not cool, dude. If you do you open yourself up to being called a subliminal racist of some kind. Just wait — someone is going to say this about me in the comments.

But if the blunt-spoken alcoholic played by Howard Duff in Robert Altman‘s A Wedding (1978) had been invited to Rachel and Sidney’s wedding, he would have said something or other, trust me. Because he was the kind of wealthy middle- aged guy who didn’t give a shit because he was always half in the bag. 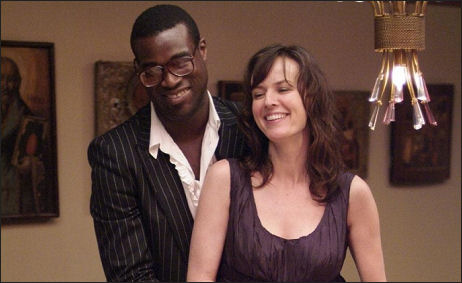 I was hoping that Demme had decided to include one character like this in Rachel Getting Married. Someone who wouldn’t necessarily say the wrong thing, but who might say the right thing in a slightly wrong way. Someone who doesn’t quite fit the sensitive mold. Demme doesn’t, of course. It’s not in him.

Rachel Getting Married, written by Jenny Lumet, is mainly about how Rachel’s older sister Kym (Anne Hathaway), a longtime alcholic and drug-user now living in a rehab facility, screws things up by being her natural attention-grabbing self, scheming to make most of the conversations about her, only sometimes letting the happy couple have the spotlight. Me, me, me, me. me.

But a friend has observed that the way Demme portrays the African-American and Jamaican characters — Sidney, his Army-serving younger brother, his parents and the various musicians and guests who float in and out — is a form of benevolent reverse racism. He does this, my friend argued, by making certain that only the white characters — Rachel and Kym and their parents, played by Debra Winger and Bill Irwin — are the screwed-up ones. Antsy, haunted, angry, nervous, gloomy. But the darker-skinned characters are all cool, kindly, radiant, gentle, serene. 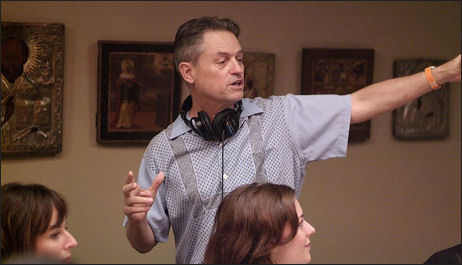 I was a little surprised when I first heard this view, but I’m starting to think she may have a point. It does seem a little phony. I would have invested myself a little bit more in Rachel Getting Married if, say, Sidney has been a wee bit obnoxious or an obsessive-compulsive or a relentless pot smoker — anything but the dull block of wood that Demme, Lumet and Adebimpe have created. Everyone everywhere has conflicts, problems, insecurities, regrets. Except in films like this one.

All to say that I never really believed Rachel Getting Married. I enjoyed the craft and random energy of it, but I never believed that I watching real-life people. Every step of the way I felt Exiled in Demmeville.