Not The Usual Bloodsucking

Tomas Alfredson‘s Let The Right One In (Magnolia, 10.24) is easily the most strikingly unusual vampire pic that anyone’s seen in I don’t know how long. The fact that Overture Films and Spitfire Pictures are developing a U.S. remake with Cloverfield‘s Matt Reeves on board to direct speaks volumes. It’s one of the standout originals of ’08. 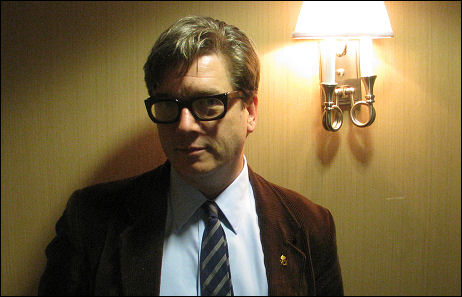 I spoke to Alfredson earlier today — here’s the mp3 file
Let The Right One In doesn’t compose with the usual brushstrokes. The vampire (Lina Leandersson) is a tweener girl and the male lead, a mortal, is a wimpy blond male (Kare Hedebrant) who’s in love with her. It has about 50 CG shots but very few are “noticable.” The violent moments happen suddenly and sometimes off-screen. And it hasn’t been shot like a typical horror film (i.e., in a spooky-sexy-dreamscape way) but with a flat, over-bright, industrial texture. And everything in the film is surrounded — blanketed — with lots and lots of snow.
I spoke with Alfredson earlier today, and if the film doesn’t make clear it hasn’t been directed by a horror film buff, Alfredson repeatedly emphasizes this. He’s not Guillermo del Toro , not by a long shot. The only significant Dracula movie he’s seen, he says, is the old Bela Lugosi version from the early ’30s. That means he hasn’t seen Francis Coppola‘s Dracula or any of the Hammer Dracula films of the ’50s and ’60s or anything else along these lines.
Just listen to our conversation — you’ll understand where he’s coming from soon enough.
The only problem, as I said before, is the title. Who in hell is going to remember Let The Right One In or associate it with tweener vampires? Talk about a title that means nothing — nothing at all! — to anyone. Movie titles should be aimed at the dumbest person in the room. Leo Tolstoy knew this when he called one of his novels War and Peace. Although Alfredson’s, which is taken from a Morrissey lyric, does sound cooler and cooler the more you say it.