“My name is Joel Goodson. I deal in human fulfillment. I grossed over eight thousand dollars in one night. Time of your life…huh, kid?” 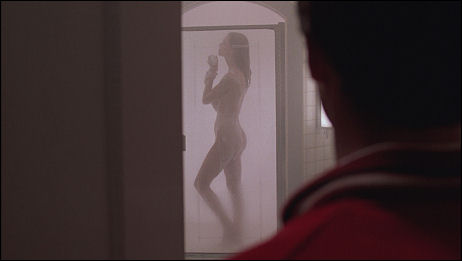 And perceptively at that.

“‘The dream is always the same,’ says Joel, a high school senior (played by a 21-year-old Tom Cruise) from a prosperous North Shore suburb, speaking directly to the camera as he introduces a fantasy sequence that allegorizes his situation: a beautiful young woman taking a steamy shower invites him to join her, but when he steps into the stall, he finds himself transported to a classroom where he has arrived two hours late for a college entrance exam.

“The satire has an almost Swiftian precision and lucidity. While his parents are away on a brief vacation, Joel, with the help of a sloe-eyed young prostitute (Rebecca De Mornay) from Chicago, turns the family home into a brothel for his sexually frustrated high school friends. Applying all the lessons he has learned as a member of his school’s Junior Enterprisers club, Joel proves himself a
budding capitalist of genius.

“A more single-minded satirist — Billy Wilder, for example — might have stopped there, but Mr. Brickman wraps his glinting wit in a velvety style. With his masterly use of visual motifs — the train and the fog of the opening sequence reappear periodically with increasing significance — and slow, contemplative rhythms, he gives the comedy a lyrical dimension, building to a final sense of moral devastation.”

There are things in this film — many things — that are, for me, delightful in and of themselves. Grace moments, cultural minutae, echoes of my own home-town shenanigans, college fears, irony upon ironies, upper middle-class entitlement jokes, the aroma (I guess I should call it the stink) of creeping, inevitable corruption. 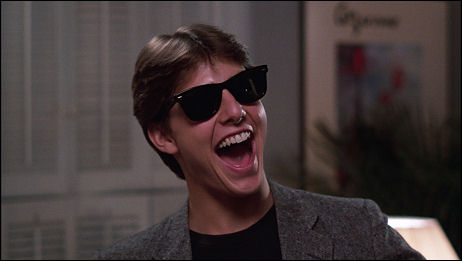 I don’t think any actor in any film has ever used finger-wagging sign language with such a deft and perfect touch as Cruise does in the Drake hotel sequence. A little cock of the left index finger across the lobby, a signal to DeMornay that “we’re here, we’re on to you, you’re gonna return my mother’s egg.” But which also conveys Joel’s hesitancy, lacking of aggression and naivete, his Lake Forest-ness.

I don’t know if I can watch this film any more. I’ve seen it maybe 25 times now. But I’m intrigued, as always, by the Warner Home Video remastering that, according to Kehr, “restores the film’s subtle textures.” I’m also interested is comparing the soothing studio ending (which I always thought was more of a mixed-bag thing, given that the happy ending comes from Cruise managing to hoodwink his father along with the ridiculous but satisfying news that Richard Masur‘s “Bill Rutherford” has approved Joel’s admission to Princeton) and Brickman’s “original, more tentative and melancholic conclusion.”

Has anyone seen the DVD, and can they describe how the alt. ending goes?

I’m having difficulty with the fact that this film came out a quarter of a century ago. Call it a mortality moment.