In a discussion of the Best Actor race in his latest Envelope column, Pete Hammond reports about an “honest-to-God truth, swear on a stack of bibles” response from an insider who saw a rough cut of Clint Eastwood‘s Gran Torino earlier this week. The tipster said that “the old guy could actually win it all for this one. He’s that good in this.” The insider adds that “the role gives Clint great emotional range,” Hammond says. 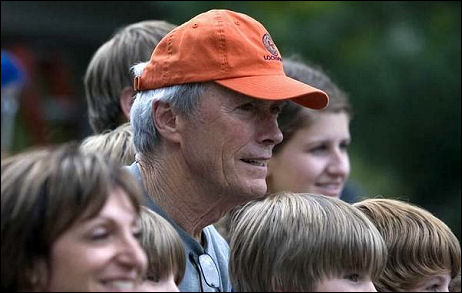 “With a smart True Grit style campaign that takes note of the fact Eastwood has actually never won an acting Oscar, he certainly should vault to the top of any list if indeed the film and performance lives up to this earliest of hype.”
Question: Is the person who whispered to Hammond the same one who told Kris Tapley that Clint could be a contender? How many people went to that screening last Monday or Tuesday?

October 24, 2008by Jeffrey Wells13 Comments
« Previous post
“One of the best I’ve seen all year…”
Next post »
Brute Force