Warner Home Video’s double-disc release of a remastered Quo Vadis has two selling points, which are (a) Peter Ustinov‘s portrayal of Nero and (b) Miklos Rosza‘s score. Otherwise it feels like a wash. I’ve never had the slightest interest in seeing it. Partly because I’ve never read a truly rousing review, and partly due to Robert Taylor, an actor I’ve never liked and have always tried to avoid, being the lead. 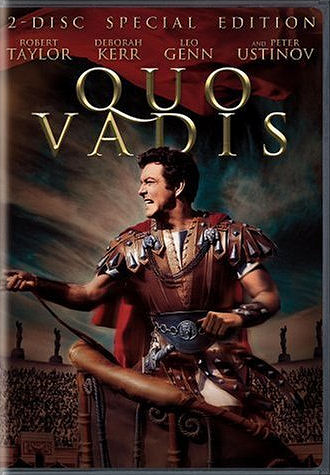 Is there any big-time star of the old studio system of the ’30s, ’40s and ’50s who matters less to anything or anyone right now than Taylor? Just as some old-time actors have a vitality and an edge that transcends time and fashion and gives them a kind of perennial status, actors like Taylor bring only stodginess and antiquation to the table — they’re relics, timepieces, men of their time but not in the least bit ours. On top of which he was a “friendly witness” in front of HUAC in the late ’40s.