Yesterday The Envelope‘s Tom O’Neil asked a few columnists to respond to one of his impassioned topic du jours — i.e., does Oscar have a grudge against Angelina Jolie? Sucker that I am, I bit. I meant to tap out a brief reply, but it turned into something longer. Happens every time. 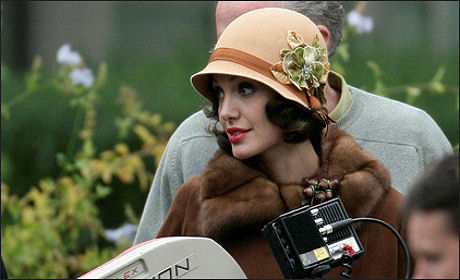 Angelina Jolie during filming of Changeling

“She hasn’t been nominated since 1999,” O’Neil argued. “And last year she won heavy praise for her Mighty Heart performance (receiving Golden Globe and Spirit award noms, among others) but got snubbed by Oscar. Is this the price that Hollywood’s most fabulous star must pay for her life in the tabloid headlines? Or can that Oscar magnet Clint Eastwood change things with Changeling?”
Here’s what I wrote:
“I’m not sensing a punishment mentality directed at Angelina Jolie because she’s a gossip press mainstay. Perhaps subconsciously there’s a certain resentment aimed at anyone whose life has become a pageant of relentless tabloid fodder and thereby is adding to the idiot wind sandstorm out there that does none of us any good. I think we could all do well to focus less obsessively on the perks and pleasures of abundant wealth, which is what every vapid, under-educated status seeker in every corner of the globe dreams about every waking day.
“AJ is a likely…okay, certainly a possible Best Actress nominee for Changeling, although much of what viewers are feeling from that performance is sympathy/ empathy for her real-life character, Christine Collins, being unfairly pushed around and beaten up by politicians and bureaucrats, and, of course, admiration for her steel and determination. It’s not so much about who she is and what choices she makes as much as her character’s refusal to buckle under.
“As such, the performance, good as it is, is a wee bit one-note. As it was given to her, I mean. It’s a bit of a noble endurance test. Oh, how I suffer but they won’t keep me down because I will not rest in my attempts to find my real kidnapped son. Maybe I’ll find him and maybe I won’t. but I will nonetheless cross that finish line because Christine Collins doesn’t back down.

“Jole is a very beautiful actress who knows how to emote and play to other actors in an honest, untricky way that doesn’t prod or grate. But her performance is somewhat less interesting and less penetrating than the performances by Kristin Scott Thomas (I’ve Loved You So Long); Anne Hathaway (Rachel Getting Married), Melissa Leo (Frozen River) and Kate Beckinsale (Nothing But the Truth).
“And yet to come is Kate Winslet (Revolutionary Road, The Reader) and Meryl Streep (Doubt).
“But AJ will probably get nominated….maybe. I don’t know, really. I wouldn’t have a problem with this if it happens. Did I come out of Changeling feeling respect and admiration for her performance? Certainly. Do I really care if she gets nominated? Honestly? No, I don’t. Not really.
“You know why? Because she’s too famous, has too many kids, has too much money and spends it too conspicuously, is too drop-dead beautiful, is too ambiguous in her position about Iraq (does she support the Bush-Cheney war effort because more American money means more Iraqi families will have a chance at restoring their day-to-day lives to where they were before the 2003 invasion?…something like that?), and because she and Brad pay some ridiculous amount each month to live in a 35-room mansion (i.e., Chateau Miraval) in the south of France. 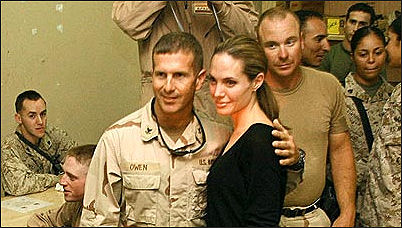 “And she wants an Oscar nomination on top of all of this? And if this happens, then what? Will she want to lead her own space shuttle mission? Will she use her fame and influence to fund the construction of a huge European style stone castle somewhere in the Rocky Mountains that will provide food and shelter for homeless people and the terminally ill, and allow them to learn computer skills while providing access to high-def/Blu-ray TV watching in the evening hours, 7 to 11 pm?
“Angie has convinced most of us that she’s basically a good lady of talent and taste, myself included. She’s a not-untalented actress whom I very much respect (her work in A Mighty Heart was more compelling that her Changeling performance), but on the other hand she really is quite the queen, and I’m not sure how I finally feel about that. I do think she has quite enough on her plate as it now stands. And I think that plate is quite large (you could say banquet-sized) and nouveau-riche flamboyant and gold-plated, and at the end of the day I’m not sure that I find the Brad-Angie brass band/circus caravan/media show all that appealing.
“Consider a parental values piece I tapped out last July called “A Lesson in Modesty,” which focused on their opulent lifestyle:
“‘My interest is in Chateau Miraval, the $70 million dollar, 35-room estate near Aix en Provence which Pitt and Jolie are reportedly intending to lease for three years. Who needs 35 rooms? Little kids always share bedrooms, Brad and Angie will share a room with the twins plus..what, a nanny and a couple of assistants? They could all probably make do with a ten-room mansion. Fifteen might be a wee bit extravagant. Twenty would be, like…whoa, take it easy. But thirty-five friggin’ rooms? 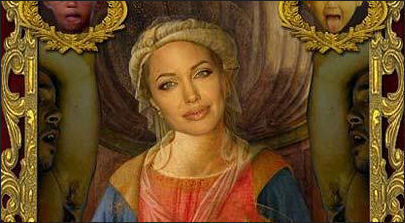 “‘I’m talking about passing along decent values to your kids. I realize that Chateau Miraval is a working wine vineyard so you need facilities for the guys who work it, but it’s not a good thing to instruct your children through day-to-day experience that nouveau riche extravagance is the norm. Even if you pass along the best kind of emotional and spiritual upbringing by your words and deeds, an opulent lifestyle will always create a sense of swagger and entitlement and a nonstop litany of lusts and appetites.
“‘The best thing you can do is give your kids to a natural, non-flamboyant, modestly-scaled life. They should have love and comfort and occasional perks, but mainly within the framework of a life based upon need and nutrition and not whimsical indulgence. The lives of Brad and Angie’s kids should not be about what they’d like to taste or fuck around with or splash around in on a daily whim because their parents are loaded and ‘why not?’ The Jolie-Pits are doing their kids no favors by bringing them up this way. 99% of the world lives in a world of limits and natural proportion.’
“What am I saying at the end of the day? That at best, Angelina Jolie is a third-place contender right now behind Kristin Scott Thomas and Melissa Leo. She has the power of Universal and her own fame behind a campaign effort, and I imagine she’ll prevail nomination-wise, which will be fine if it happens. But I don’t think she’ll win because of what I wrote in paragraphs #5 and #6 (as well as the three that follow, plus my view that Changeling is at best an A-minus or B-plus). I don’t think I’m alone in this view. I think a lot of people probably feel this way.”