I don’t mean to sound like a shallow Hollywood guy, but Harrison Ford should consider dying his hair dark gray. Because it’s light gray in the new Crossing Over trailer and approaching white, and it just bothers me that Han Solo is looking this long of tooth. He’s only 66 and he looks 74. I just want him to look like a semi-credible middle-aged brawny stud, like he did in Firewall. Hold back the tide!

I’m not saying Ford needs to do a Walter Matthau or a Ronald Reagan. I just don’t want him to look like a guy who’s two or three moves away from a senior citizens home. Is that such a empty and rancid sentiment? 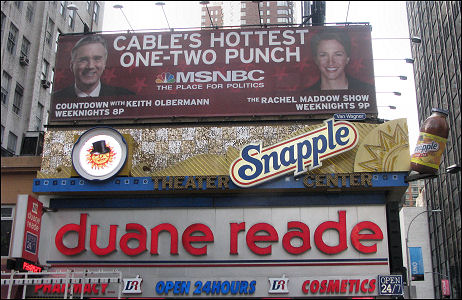 This news is several hours old, but a liberal-wet-dream spoof edition of the New York Times was sold this morning at subway stations all over Manhattan. Maybe I can still snag a copy — it’s only 4:17 pm right now. If anyone has an extra copy I’ll meet them somewhere in Manhattan and pay good money. 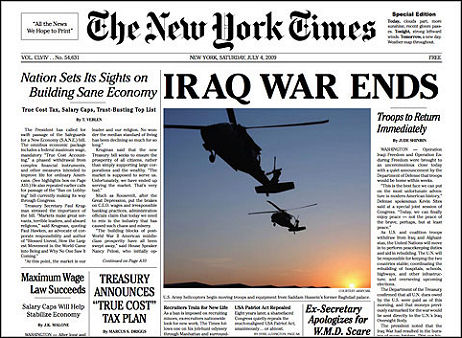 The guys behind it are The Yes Men, about whom a 2003 doc was made. Here’s the press release that went out announcing it.

Dated July 4, 2009, the publication imagines a utopian, Obama-ized reality with the Iraq War over and done with, national health care established, a flush economy, taxation of the fat and loaded, the oil companies financing a study of climate change, and…wait, Thomas Friedman‘s resignation?

A portrait of London by a Red Bull-chugging, Guiness-slurping youngish guy who aimed his video camera solely at conventional tourist sites (Picadilly, Regent Street, Soho, the Underground) and felt only the juice, velocity and hoo-hah. A faux Michael Bay sensibility if I ever saw one.

Off to a noon screening of Adam Resurrected, some filing and walk-around time for three or four hours, and then Quantum of Solace at 7 pm.

“I saw Quantum of Solace last weekend,” says Jett in an e-mail this morning from London. “Great action movie. I liked it better than Casino Royale, although the plot wasn’t fantastic. I was stirred by seeing a hint of Bond’s personal struggle over that girl from Royale. Inner anguish makes Bond more human in this movie. Plus, I saw it with digital projection and great sound, and it kind of leaves you with a wow feeling at the end.” 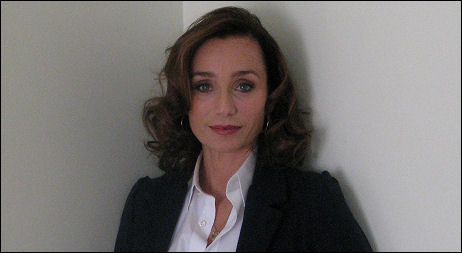 Last night The Envelope‘s Scott Feinberg managed to get on the phone with Australia director Baz Luhrman to discuss various reports about the troubled film, and in particular last Sunday night’s report from Australia’s Herald Sun that Luhrman — spoiler-averse, beware! — has been pressured to go with a “live Hugh” happy ending. 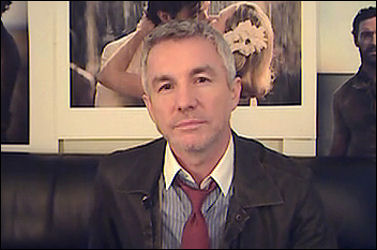 They spoke just before Luhrman boarded a flight from New York (where he and the cast had taken part in an 11.10 Oprah special on the film) back to Sydney, where he’s now completing post-production work on the film, which is set to open nationwide on Wednesday, 11.26.

I’ve read Luhrman’s answer about the live-dead ending twice and I’m still not entirely what he’s saying, but he seems to saying that in the struggle to finish the film in just the right way he found a theme that he believed in. And that somebody (not necessarily H.J., apparently) That’s how I’m reading it, at least.

“What’s interesting is [that] I wrote, I think, six endings in all the drafts I did, shot three, and I ended up concluding the film in a way in which I — probably more than anyone — least expected,” Luhrman begins. “And there is a death in the ending of the film, by the way — it’s a bit of a twist and I won’t give it away.

“And, incidentally, the two endings, by the way, tested completely the same essentially, you know? They really did in the numbers. But I came up with a third ending, and the ending that I’ve created about the film came from a place of a response, actually, to the thing that I wanted the movie to be — the important, big idea of the movie — how to amplify that big idea. And, essentially, that’s, as the little boy says, ‘The rain will fall. The grass grows green. And life begins again.’

“And that idea — that in a world that is so full of fear, and things are falling down, and people are somewhat concerned — sending a movie out there that can leave people with a sense that, despite it all, you can go back to Faraway Downs, or that you can go on, and a sense of hope, is something I really felt personally I wanted the movie to give out.”

“But I think the big story is how the actual ending I came up with — which is quite unusual, it’s not easy to say it’s ‘the happy one’ or ‘the death one’ — it’s something quite surprising. And it found itself, really.”

“You can go back to Faraway Downs” sounds like a little bit of a push-back on “you can’t go home again.” Which I know from life experience to be absolutely true. Perhaps I’m misunderstanding.

I get it. I know why the mostly female audience (literally young or young at heart) is expected to flock big-time to Twilight (Summit, 11.21). It’s because they’ve read Stephenie Meyers‘ books (or book) and they basically expect the film to be Wuthering Heights with fangs. Fine — no problem with that. 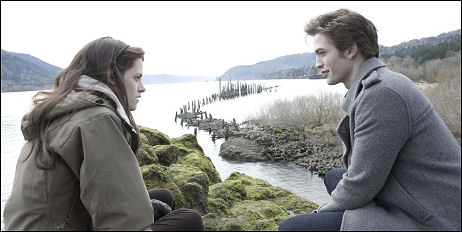 And I know for sure that the vast majority of this audience doesn’t care very much about Meyers’ Mormon background. And that fans who are aware of this probably haven’t noticed (or cared to notice) what themes or metaphors in the books and the film express some aspect of Mormon culture.

But once the film is finally screened for people like me (which will be…what, two days before it opens?) and once it opens commercially, I’d like to read a concise and knowledgable piece that explains it all without going on and on. The Mormon Undercurrents in Twilight for Dummies. I’m not looking to bash the film because of any possible Mormon tissue within. Like I said, most of the fans don’t know or care about the undercurrents, and I have other fish to fry.

But if there’s any kind of theological Mormon presence in Twilight, I’d like to clearly understand what it is. Even if there’s just a faint aroma, I’d like to sniff it with forearmed knowledge.