Australia “is not without flaws, it’s not the masterpiece that we were hoping for, but I think you could say that it’s a very good film in many ways,” says The Australian‘s David Stratton, who’s obviously writing from a kind of Down Under home-team perspective. 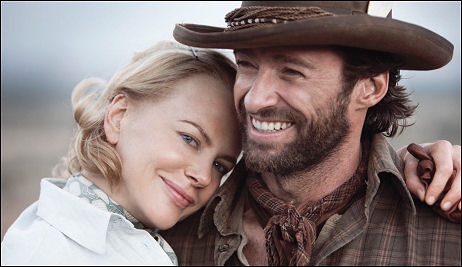 “[But] while it will be very popular with many people I think there’s a slight air of disappointment after it all.

“Like his earlier films Strictly Ballroom, Romeo+Juliet and Moulin Rouge, Australia shows Baz Luhrmann as a very theatrical director. He has a great eye for compositions and the film is beautifully shot by Mandy Walker, but there’s theatricality about the film which is a bit off-putting at the beginning. The early scenes, even the first 20 minutes or so of the film, are handled in a slightly artificial, arch manner which doesn’t sit well with the outback locations and the natural settings of the story.

“It’s all very well to be artificial when you’re dealing with a theatrical concept like Moulin Rouge or even Strictly Ballroom, but it doesn’t really work so well when you’re doing the same sort of thing here, so there’s something that’s just a little bit off key about these scenes. Then once the cattle drive gets under way either you get used to it or that aspect of it is played down because the remainder of the film is much stronger in a rather conventional way.

“I have to say, there are a lot of cliches in the script, a lot of familiar elements from other films of the past — The Wizard of Oz and the song ‘Over the Rainbow’ are heavily referenced — and it’s as though the film is aimed at not so much an Australian audience but an international audience, and especially an American audience. 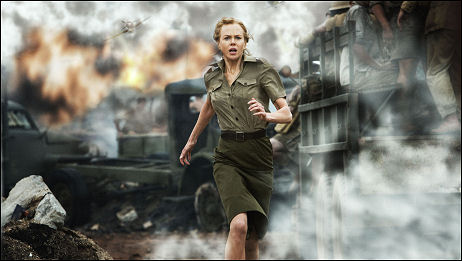 “I will say that the acting is of a very high level, especially given that some of the actors have been encouraged to perform in this rather stylized, theatrical way. Nicole Kidman does a very good job as she develops from this very stiff, awkward, naive Englishwoman to become a really warm character at the end of the film. And Hugh Jackman has tremendous charisma and charm.

“The supporting cast is particularly good. Jack Thomson as the alcoholic accountant for the property gives a lovely performance, Bryan Brown is a terrific as the cattle baron although his demise is extremely perfunctory, and David Wenham is another terrific villain, very charming and intense.

“In minor roles there are all sorts of interesting people including Ben Mendelssohn, Bill Hunter and Arthur Dignam. And then there’s little 12-year-old Brandon Walters, who plays the Aboriginal boy, who’s really very good indeed.

“Despite its flaws — and it certainly has flaws — I think Australia is an impressive and important film, and if I were to give it a star rating I would give it three and a half out of five.”