Agreeing with my (two or three years old) suggestion that Russell Crowe should do whatever it takes schedule- and commitment-wise to land the role of Moe in the Farelly Brothers‘ Three Stooges flick, Hunter Lurie has come up with two inspired additions — Philip Seymour Hoffman as Curly and Robert Downey, Jr. as Larry. Please make this happen, God. Think about it. Perfect. 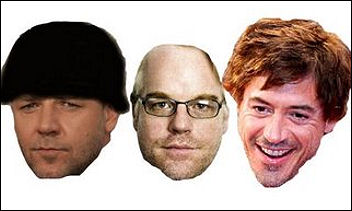 Lurie allows that “maybe Crowe is a funny guy” given that “hitting the hotel clerk in the face with a phone is a borderline-Stooges stunt on its own. No maybe about it, fella. One, you can’t nice or mellow your way into being funny — you need to be deep-down angry. Ask any honest comedian (or anyone who knows comedians). And two, I once saw a clip of Crowe at some Hollywood red carpet event when he grabbed the mike of an obsequious entertainment reporter (somebody from Access or Telemundo) and went into a Jose Jimenez-as-red-carpet-whore routine that I swear was one of the funniest improvs I’ve ever seen.

I have a slight issue with Lurie’s Photoshopping — Hoffman looks like his head was sliced off by a helicopter blade, or by Steve Martin‘s Dr. Michael Hfuhruhurr — but I’m willing to let it slide.