Spoiler Whiners Beware: An 11.10 Herald Sun article is reporting that with a little more than two weeks before the big opening, Australia director Baz Luhrman — get ready, here it comes — “has bowed to studio pressure for a happy ending” by letting Hugh Jackman‘s character live instead of die. 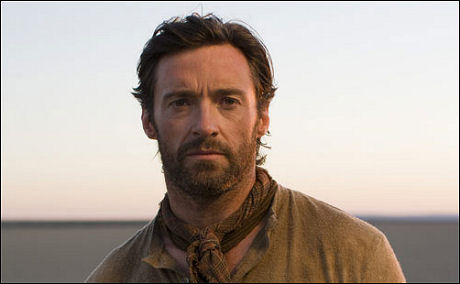 “Luhrman’s initial cut, which ran for more than three hours, ended with Jackman’s character, The Drover, dying in the final scenes,” the unbylined story reads.

“After disastrous reviews from test screenings, 20th Century Fox executives decided [that] the film’s final moments should be more uplifting. Or rather, “After intense discussions with studio executives, Luhrmann was persuaded last week to go for a more uplifting ending.”

“One test-screening audience member described the film as ‘an action-filled tragedy‘ and urged Luhrmann to change the ending.

“‘If they can tastefully tie this movie up into a solid story, with a nice pace, Baz will have a winner here,’ one reviewer wrote. ‘And there is no reason to kill off Wolvie (Jackman) in this one, come on.’

“Those who’ve seen the film say the performances are terrific but it is Jackman who steals the show.”