It is standard Hollywood policy to elbow big-name male actors into secondary character roles once they hit their late 50s. And so Dustin Hoffman, one of the all-time acting legends whose leading-man career went great guns from the late ’60s to the early ’90s, has been playing colorful oddballs over the last decade or so. The last time he had a lead role with a seriously dimensional beating heart was (am I wrong?) in Stephen Frears‘ Hero (’92). 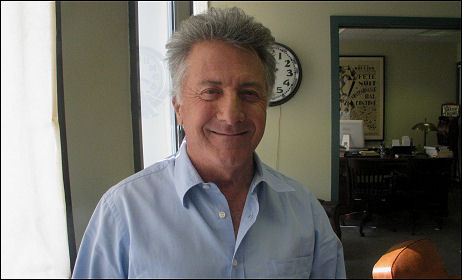 But now he’s gotten hold of a solid lead role — a kind of soulful sad sack — in a modest but touching drama called Last Chance Harvey (Overture, 12.26). And it’s good to see Hoffman delivering again on this level. My guess is that others will concur. I’m not permitted at the moment to say anything about the film itself, but I can say this for sure — it’s agreeably restrained and well-mannered, and it doesn’t get in the way of Hoffman’s performance or that of his luminous costar, Emma Thompson.

As Harvey Shine, a Manhattan jingle writer on shaky professional ground, Hoffman hits a variety of notes that all say middle-aged downish — subdued, lamenting, glum, anxious, doleful, morose. But he’s determined to push all this aside and fly to London and attend his estranged daughter’s wedding. He’s not welcomed with open arms, having been a less-than-fully-loving and supportive dad, which is cause for more mood indigo.

And then, after he runs into Thompson’s Kate and starts to slowly succumb, Harvey (naturally, like anyone in his position) begins to warm up and radiate the good stuff. It’s like someone else is suddenly born within (as falling in love enzymes tend to manifest). He becomes likable, restrained, decent, manly, compassionate. 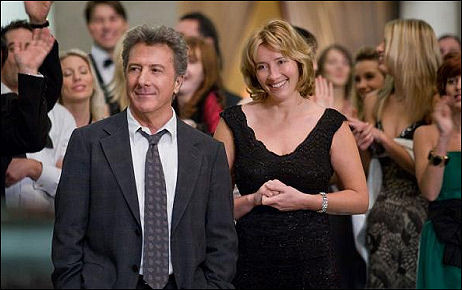 It’s a very pleasant arc, and is particularly seductive from a spectator standpoint since it allows — enables — one of our greatest actors to deliver a deeply winning performance.

There’s a third-act moment in particular when Harvey delivers a toast in front of a roomful of revellers at his daughter’s wedding reception. They’ve been treating him rather horridly and he’d be well within his rights, you think to yourself, to zap them back a little. But he doesn’t — and this is the moment when Hoffman and Harvey really won me over. The man shows class. He holds his ground and shows a touch of the gentle and the forgiving. He rises above.

It’s especially moving knowing that Hoffman, as he told me this morning, wrote this speech himself the night before filming. Along with his wife. Which goes to show that sometimes the stuff you write quickly with the pressure on (or the train coming round the bend) can work out very nicely.

I visited Hoffman at his Brentwood office this morning to talk things over. Here‘s the mp3, which I haven’t had time to edit. Yet. I have to bolt out of here and do errands but I’ll fill in with some more thoughts sometime later on. I can’t focus because of the election returns. I’m getting very anxious right about now. 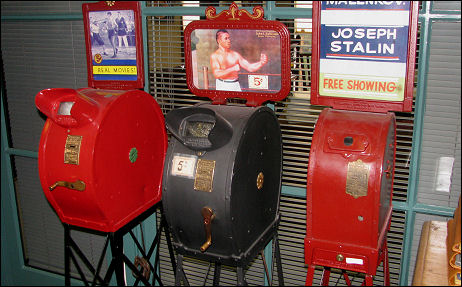 Three Nickelodeon machines in the office suite of Punch Productions.