Indiewire‘s Eugene Hernandez wrote this morning that last weekend he “had a private talk with LA Film Fest director Rich Raddon, a Mormon member of the film community” (and, of course, director of the L.A. Film Festival) “who was drawn into the spotlight late last week after it was revealed that he donated $1500 to the campaign in support of California Prop 8” — the measure that banned gay marriage. 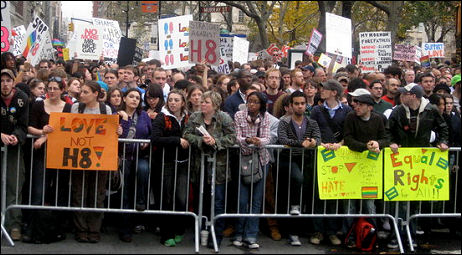 A rally for marriage equality in New York City two days ago. (Photo by Eugene Hernandez/indieWIRE)

“Rich is a longtime friend within the film community and I agreed to speak with him off the record,” Hernandez writes, “so I can’t detail the substance of our conversation. However, I can relate that he is in the midst of a painful and emotional process as his personal and professional worlds collide rather publicly.” No shit?

“During our talk, I expressed my own disgust over the tactics of his church and reiterated how offensive the campaign against equality is to so many people, especially within the film community. Raddon is already hearing this first hand from many people around him, so I also listened carefully as he expressed his own hope that the goals of both sides can be achieved peacefully and harmoniously going forward.”

I agree with producer Christine Vacchon‘s statement to Hernandez that “it’s fucked up when the left starts acting like the right.” Hernandez also quotes Vacchon’s Facebook statement, which she posted last Friday night: “I wish Rich Raddon did not support prop 8 — but he is entitled to his opinion and he’s entitled to put his money where his mouth is.”

“‘Where do you draw the line?'” Vachon added, “decrying a ‘witch hunt’ and rhetorically wondering whether all employees would be vetted for their political beliefs.”

But what exactly is Raddon envisioning when he says that “the goals of both sides can be achieved peacefully and harmoniously going forward”? To have supported Proposition 8 is to have supported bigotry — no ifs, ands or buts. Raddon is obviously entitled to stand by his convictions, and I suppose that letting this one pass and turning the other cheek is in keeping with the spirit of Barack Obama.

But would Vacchon be saying “too bad but comme ci comme ca” if Raddon had given $1500 to a more universally (i.e., more widely understood) heinous cause? Indeed — where do you draw the line?