I’m tapping out my Benjamin Button reactions as we speak, but I have a phone interview set for 9:30 and I have to focus on that for a bit. All I know is that I don’t know what’s going on with the Best Picture race. Not any more. I’m lost. The tracking software in my head that has generated those old gut hunches for years on end isn’t working. I don’t mean to get all Wim Wenders–Dennis Hopper on you, but I suddenly don’t know who I am or who anyone else is. 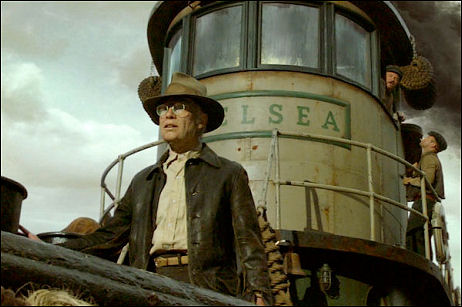 I’m not at all persuaded, in other words, that Button, gently touching life-journey meditation and technical landmark film that it obviously is in many respects, is the Big One. It’s beautiful and immaculate and lovingly brush-stroked to a fare-thee- well, and thematically deep and far-reaching, but boil it all down and it’s basically a leisurely Gump cruise on a slow riverboat down an easy river, and filled with all kinds of touching meditations and pastoral riches and a constant awareness of the transitory tenuousness of life. Which is fine. It moves, haunts, entrances, caresses and provides as much warmth and emotional reflection as director David Fincher and screenwriter Eric Roth felt was right and appropriate.

But the story tension is nil (no “what’s gonna happen next?” intrigue), the rooting interest is zip (which isn’t to say you don’t care for Brad Pitt’s Button character but he’s nothing if not a fundamentally passive character — an absorber rather than a decisive doer with a primal goal or need) and that schmaltzy emotional compost that Robert Zemeckis knows how to shovel and which a film like this could use is barely exploited.

Fincher is one of my filmmaking heroes, Lord knows, but he’s too sardonic a fellow to drop his emotional pants. Button is a magnificent living painting and a technical dazzler for the ages, but he may not have been the right guy to make a film like this. It’s not a cold film, as some have alleged, but (and I hate saying this) it needs to be a little bit sappier and schmuckier and schtickier to win over the Academy squares and popcorn munchers in the plexes. It’s a little too burnished and upmarket (i.e., sparing, carefully measured) for its own good.

November 25, 2008by Jeffrey Wells25 Comments
« Previous post
Is What Button Is Enough?
Next post »
Redford vs. Bush Eco-Spoilings