I’ve been listing Kate Beckinsale as one of the Best Actress contenders in the Oscar Balloon for her Nothing But The Truth for a long while now. Not just because she’s delivered the best work of her life in this film, but because her performance as a Judith Miller-ish, Washington, D.C.-based journalist who goes to jail for refusing to give up a source is full of serious investment and quiet, toned-down believability. 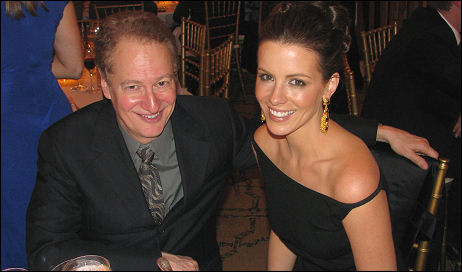 At last night’s Peggy Siegal party for Nothing But The Truth at the Plaza Athenee, screenwriter Stephen Schiff and NBTT star Kate Beckinsale — Thursday, 11.13.08, 10:25 pm

And because I can’t think of another female lead performance this year that comes so fully from the eyes. Watch her in NBBT and tell me this isn’t so. They glisten with feeling in every frame.

Just as certain long-of-tooth actors have been nominated because they’ve been doing good work for three or four decades and it’s time for their gold-watch tribute, younger actors like Beckinsale deserve kudos also for suddenly going deeper and stronger, not just in their choice of roles but by nailing them cold.

Beckinsale starred in a string of commercial good-enoughers and in more than her share of vampire films starting in the mid ’90s, but then she turned a corner with her performances in Snow Angels (which almost no one saw) and Nothing But The Truth. And that warrants respect.

I was moved to write this, yes, because it came back to me after speaking with Beckinsale at last night’s Peggy Siegal party for Nothing But The Truth at the Plaza Athenee. But I feel this anyway so what the hell. I believe what I believe and say what I say when I damn well choose to say it.

The only thing going a little bit against Beckinsale is that Nothing But The Truth is a “tweener” — a gripping, efficient, first-rate political drama that is seen as not “indie” enough and at the same time not a high-concept, big-studio powerhouse presentation, which is what we’ve all been trained to give nominations to out of an ingrained instinct to show obeisance before power.

Nothing But The Truth director-writer Rod Lurie attended the event also, as did costar Vera Farmiga, with whom I spoke for ten or fifteen minutes. I spoke also with producer Jean Doumanian, who’s will bring forth the film version of August: Osage County sometime in ’11.

I arrived at the Plaza Athenee a bit early, and guess who I saw arriving at the hotel, all alone and carrying his own suitcases? Rudy Giuliani.