Late to the Party

All the cheapie tourist shops in the Times Square vicinity are selling Barack Obama T-shirts, you can’t find a newsstand anywhere not selling bullshit Obama magazines (some perfect-bound), and TV ads are hawking commemorative bullshit Obama coins. But Madame Tussaud’s on 42nd Street, something of a celeb-ogling gold standard experience for people from Indiana, won’t have its life-size Obama figure “until January,” according to a Tussaud’s employee I spoke to yesterday. 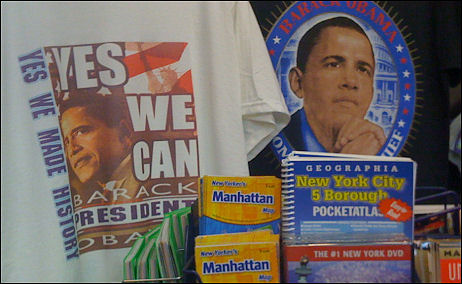 Tussaud’s, in short, could be enjoying a huge surge in business due to Obama fever (i.e., folks having their picture snapped as they pose with the wax BHO), but management, the guy said, held off on starting work on an Obama figure until the 11.4 election. Every pollster in the business ran numbers starting last summer that strongly indicated an Obama victory over McCain, but Tussaud’s execs, to go by what I was told, wouldn’t commission an Obama figure until McCain was officially beaten. Brilliant! To me that means they’re (a) stupid or at least cautious to a fault, or (b) cash-strapped. Or both.

Here’s a shot I took two or three years ago of a popular Morgan Freeman Tussaud’s figure, obviously taken around the holidays. 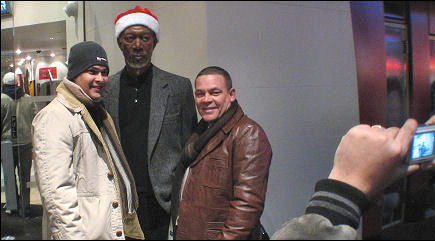