Mumble in the Jungle

The Guardian‘s Simon Hattenstone is calling Benicio Del Toro “Hollywood’s finest mumbler since Marlon Brando. He is never better than when mumbling his lines. Except, possibly, when he has no lines to mumble at all. He loves nothing more than paring a script down to nothing. No one can grunt, wince or wheeze their way through a movie quite like Del Toro. 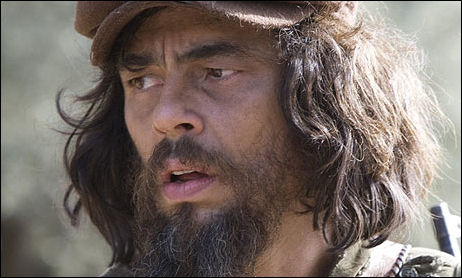 “Which makes his new film, Che, the perfect vehicle for him. In the movie, to be released in two parts (The Argentine and Guerrilla), Del Toro’s Che Guevara grunts through 253 minutes of action. This is a walking, rarely talking, gun-toting revolutionary wheeze machine. His performance makes Che in turn one of the most boring and most captivating films I have seen.” He doesn’t really mean “boring.” He just settled on that word as he punching the piece out. He trying to say “conventionally undramatic.”

“Politician, writer, traveller, biker, doctor, guerrilla and poster boy: few people have a more fascinating story than Guevara. But director Steven Soderbergh and Del Toro as good as refuse to tell it. There is hardly any narrative — we simply watch him hacking his way through the jungles of Cuba in part one and Bolivia in part two. It is a sublimely contrary piece of film-making. Only in the last minute does Soderbergh even attempt to humanize his protagonist as he reveals that he has left his four children at home.

“Hollywood trade paper Variety said Guerrilla had all the excitement of a military training documentary. And yet such is the physicality of Del Toro’s performance, the way he inhabits Guevara, that you can’t take your eyes off him.”