I’ve selected and pasted the live-wire graphs from Annie Karni‘s Harvey hit-job piece, called “Is Hollywood Hit Man Harvey Weinstein Running Scared?,” in Page Six magazine, which was published two days ago (11.23). Here and there I’ve thrown in HE comments. 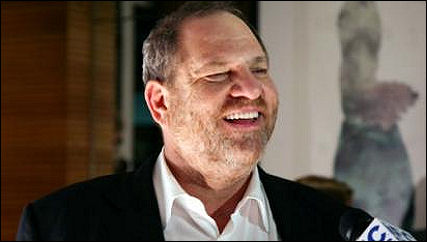 “Whatever the case, problems are apparent. In his glory days, Harvey spared no expense to lure top talent to star in his films. ‘He thinks nothing of flying to London for dinner and trying to talk you into a role,’ actress Nicole Kidman told New York magazine in 2001. Today, insiders say, he can’t afford to. ‘When Harvey’s flying talent, he flies them on his frequent-flier miles,’ says a former top executive at the Weinstein Co. ‘Even if it’s a $200 ticket from L.A. to San Francisco, he doesn’t pay.’ HE comment: I’ve been hearing for many months that Harvey is on the ropes, and stories about him shaving costs however and whenever obviously fit into this. That said, only a fool spends money like a nouveau riche hotshot. There’s nothing wrong with using air miles.

“Media watchers say that without Disney, Harvey has become just ‘another indie guy at a time when it’s very hard to be an indie guy.’ (Independent studios have to wrangle outside financing, often from Wall Street investors, and bankrolling movies typically drops off the priority list during a financial crisis.) 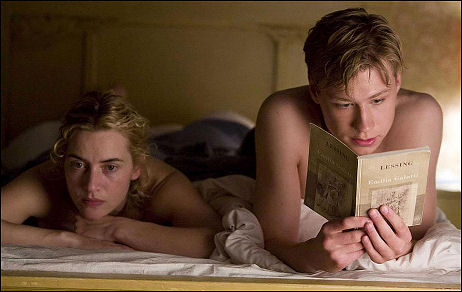 “For that honor, Harvey is banking on The Reader, which is set to open December 10, and the musical Nine, which will premiere in 2009. But insiders claim that major financial turmoil within the Weinstein Co. has been revealed through these films.” HE comment: Nine, maybe. The Reader, nein.

“Harvey has said that Nine, starring Nicole Kidman, Penelope Cruz, Kate Hudson, Marion Cotillard, Judi Dench, Sophia Loren and Daniel Day-Lewis, will be ‘bigger than Chicago’ — the Miramax film that won Best Picture in 2002. ‘He sees it as his transformative hit,” says one industry souce, explaining why last year Harvey was turning down offers to co-finance the film. ‘He wanted to own it, but he ran out of gas. He’s putting on a front that it’s business as usual, but he ran out of money and couldn’t finance it himself.’ 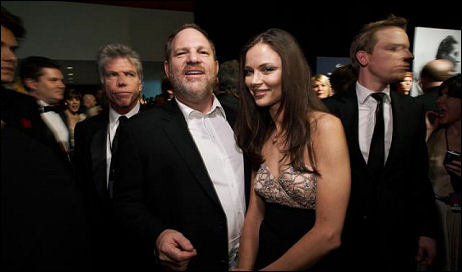 The Reader “‘is his one movie to get back in the Oscar game this year,’ says one former executive. ‘It’s his only shot for Best Picture, which is why he’s insisting on releasing it this year, even though the director doesn’t want to get it done.'” HE comment: I’m sorry, but believing that The Reader will be some kind of Oscar cow is wishful thinking. I saw it yesterday, I felt the vibe in the room, and I know whereof I speak. It’s far from a rank embarassment, but The Reader doesn’t feel to me like a formidable power-punch Oscar contender. It feels like something that should come out in February or March or September or October. It has a fine and immersive Kate Winslet performance as a lovestruck ex-Nazi concentration camp guard, and the aura of a classy, finely rendered, carefully burnished Oscar-bait film — but it doesn’t satisfy or connect like it needs to. Certain character aspects and actions feel quizzical and unfocused. The last 20 or 30 minutes in the third act are supposed to bring it all home and turn your insides into mush, but they don’t.

“‘Old Harvey would have gotten Sam [Riley] a nomination for Control [a 2007 Weinstein Co. biopic about Ian Curtis, the lead singer of Joy Division],’ an insider claims. HE comment: I pushed Riley as hard as I could in this column last year, and I feel the absence of corresponding energy, trust me, coming from the Weinstein Co.

“‘New Harvey isn’t promoting his films with the publicity and advertising needed to get in the Oscar race. He isn’t focused. He’s having too much fun trying to have a piece of everything. Unless they get great people in there at the top, I give [his company] a year,’ a source says.

“Although the Weinstein Co. employs 240 staffers (roughly half the size of Harvey’s staff at Miramax), last month four top executives left, with some even turning down promotions. 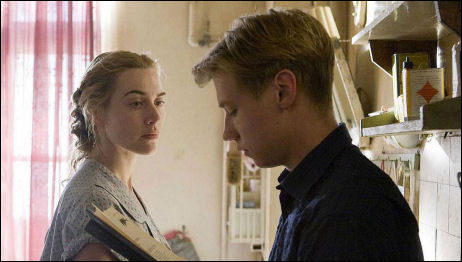 “‘The company is relying on a junior production staff,’ say insiders. ‘Nobody wants to work there so they have a problem replacing people,” says one source. “He’s been looking for a head of marketing for two years. Nobody wants that job. Michael Cole left his position as head of production and they haven’t gotten anyone to fill it.’

“Many longtime employees say Harvey has surrounded himself with too many yes-men who are afraid to tell him when he’s making poor decisions. Since the company went independent, ‘scripts were forced upon the slate that no one felt were smart projects to invest in,’ says a former executive, listing movies such as Dedication, The Last Legion and Grace Is Gone as missteps. ‘When people are shopping their projects, [the Weinstein Co.] isn’t their first choice. Miramax was everyone’s first choice.’

“Executives also complain that budget cutting is affecting their ability to be successful at their jobs. In September, for instance, Harvey didn’t fly his co-head of acquisitions, Maeva Gatineau, to scout for films at the Toronto International Film Festival. (Maeva was one of the four executives who recently left the company.)

“Last year, Fortune magazine reported that the Weinstein Co., which was bankrolled by $1.2 billion from Goldman Sachs investors, was expecting to be profitable by 2008. But employees say that ‘there [are] constant rumors that they have no money.’ Harvey maintains that the company will bring in more cash now that he’s focusing his energies on film.

“It is time for Harey to stage a comeback as grand as the one he produced for John Travolta in 1994’s Pulp Fiction. Don’t count him out yet — after all, he’s Harvey Weinstein.” HE comment: Nine, eh? I hope it all works according to plan. Harvey is a true Catholic in terms of his movie worship. The financial fortunes of the Weinstein Co,. aside, his brassy spirit is a vital component in this business. I feel more invested in the legend of this guy than I am often willing to admit.