Martin Scorsese‘s The Last Temptation of Christ, perhaps the most fully and radiantly spiritual Hollywood-funded film about Yeshua of Nazareth ever made, opened 20 years and 4 months ago. I saw it on opening day at the Plitt theatres in Century City. I came out of the theatre moved and moist-eyed, and outside there was a raging mob of Orange County goons protesting the sexual-marital scene between Willem Dafoe ‘s Christ and Barbara Hershey‘s Mary Magdelene — completely missing what the last temptation meant, too fearful and ignorant to even see the film. 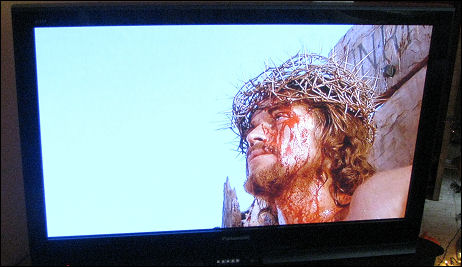 It was then that I fully realized what a haven for moronic thinking the Christian right represented and in fact was. I’ve never forgotten that experience and that lesson.

I just re-watched Last Temptation on DVD and it still blows me away, the last 20 minutes in particular, and double-particularly that magnificent death-and-salvation simulation with the leader running off the reel and the white, red, yellow and blue lights piercing through. I’m imagining a right-wing Christian zealot watching it and saying, “Jeffrey, this film is against the law that we believe in!” and my saying, “Then your laws are against my heart, and the art of Martin Scorsese.”