On 12.3 Some Came Running‘s Glenn Kenny asked, “Does it give too much away to say that Gran Torino, which Clint Eastwood stars in and directed, represents, for this critic at least, the final film in a trilogy that began with Unforgiven and continued with A Perfect World? No? Good. Let me then add that I found the film a very fine conclusion indeed to the trilogy I just made up. 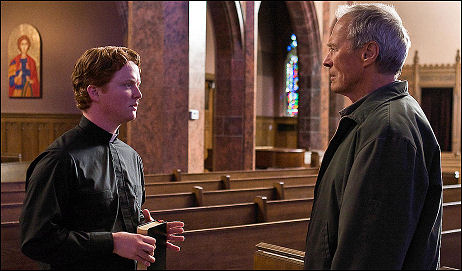 “As you may have heard, Eastwood here plays a guy named Walt Kowalski, a Korean war vet and retired Ford assembly line worker living in an unspecified Michigan quasi-suburb. He’s tough as nails, still (or so he’d like everyone to believe), cranky as fuck, recently widowed and thoroughly alienated from his kids and grandkids. In other news, his neighborhood seems to be getting overrun by Hmong immigrants.

“Did I mention Walt’s a bigot, too? Indeed he is, and he doesn’t care much for his new ‘gook’ neighbors. When Thao, the young, introverted son of the Hmong family next door reluctantly participate in gang initiation by trying to jack Kowalski’s mint condition ’72 Gran Torino, Kowalski gets out his old army rifle and goes — well, there’s no other way of putting it — all Dirty Harry on the kid, albeit without, you know, killing him.

“He hones that act on varied other miscreants in the area, and along the way winds up forging a tentative friendship with Sue, Thao’s older sister. Which leads to a more intense involvement with her family, with Sue acting as tour guide to Hmong traditions and beliefs.

“But the aforementioned gang is insistent. As is the young priest who promised Walt’s late wife he’s look out for the widower, specifically with regard to getting him to go to confession. These varied forces converge to force Walt, who’s still haunted by memories of war, to ponder going to war again.

“I may have given away too much already. So I’ll stop with the plot specifics and say that I was mightily impressed by Gran Torino, and that I also understand the rather contradictory opinions that are already flooding the intertubes. After the screening, a critic friend who also dug the picture mentioned that it reminded him a bit of a Sam Fuller film. Yes. Eastwood is a more nuanced filmmaker than the late, great, Sam, but Gran Torino does have an old-fashioned bluntness and sincerity that runs counter to quite a few contemporary modes.

“In the early portion of the film, Eastwood’s performance skirts caricature, and not narrowly, either–he literally growls to show displeasure. But from there, Eastwood the performer, Eastwood the director, and screenwriter Nick Schenk build. The overblown archetype is revealed as a singularly tortured individual.

“But Eastwood’s plain approach — and it should be noted here that, trailer to the contrary, this is not an action film; it’s largely made up of dialogue scenes, and what violence occurs is ugly and brutal and hardly…oops, I’m saying too much again — is so thoroughly out of fashion that it practically invites cynicism from certain parties.”