Muntadhar al-Zeidi, the Egyptian journalist who threw two shoes at President Bush yesterday during a Baghdad press conference yesterday, is suddenly a new Middle-Eastern folk hero, and no wonder. Thousands of Iraqis “took to the streets today to demand al-Zeidi’s release, to hail him as a hero and to praise his insult as a proper send-off to the unpopular U.S. president,” says this AP story by Qassim Abdul-Zahra and Omar Sinan. 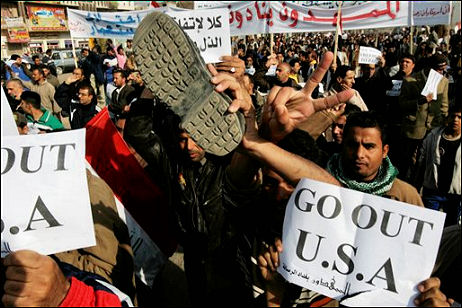 I agree with the angry masses. Like Peter Finch‘s Howard Beale did in Network, Muntadhar al-Zeidi has articulated a popular rage. Throwing those shoes

was an act of civil disobedience no different than Boston patriots throwing tea into the harbor. He did an impolite thing, but he didn’t use a weapon or hurt anyone and he said what an awful lot of people (myself included) feel. If the Iraqi authorities were smart, they’d let him go. With this act they would be saying to the Iraqi people, “We hear you” and “issues of bad manners to a visiting head of state aside, we don’t entirely disagree.”