“If moviegoers have delivered a message in the last few months,” N.Y. Times reporter Michael Cieply observed yesterday, “it is that they want their films, for the moment, at least, to be a lot more fun than their lives.” As opposed to last year or the year before when moviegoers were flocking to movies that weren’t much fun? Is Cieply supposing that The Departed, let’s say, wouldn’t sell as many tickets now as it did two years ago? I doubt that. 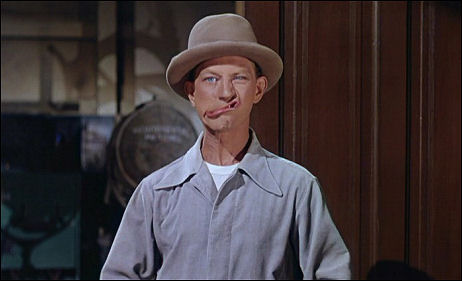 And yet the news that Mamma Mia!, God help us, has brought in a higher gross in the U.K. than Titanic is hard to ignore. It’s now the top-grossing film of all time in that country, having made $107.7 million after 22 weeks in theaters. Except it’s a fairly sickening thing to sit through. How to explain its enormous popularity beyond the fact that most people have degraded taste buds? Cieply’s theory about the spread of some kind of worldwide shallowness virus — a desperate need to be “entertained” at any cost — may be valid.

So let’s say for the sake of argument that up escapism, which 90% or 95% of the time tends to arrive in movies that are vapid, coarse, downmarket nightmares, is on the rise. I understand this if it’s true. The same kind of tastes (Busby Berkeley musicals, screwball comedies) were strong in the 1930s Depression era. But of course, that decade also brought forth the Warner Bros. gangster genre, the Universal horror films and all those Paul Muni, Jimmy Cagney and Bette Davis movies.

Every now and then we have to remind ourselves that there’s nothing in the world so spiritually deflating as entertainments that try to push feel-good vibes as an end in themselves. (Whereas a feel-good movie in the service of something honest or profound can be wonderful.) Because the simple effort of trying to make shallow entertainment whoopee is the strongest possible confirmation that there’s an extremely dark and malevolent river running through people’s souls — one that people feel a great need to fight or suppress.

To my mind there is nothing so loathsome as the mentality behind “Boy, do we need it now!” — that infamous copy line for That’s Entertainment! (’74), the first of a short series of anthology pics about the studio-era musicals, produced by Jack Haley, Jr. That’s Entertainment! wanted to be a tonic for the noirish “down” period of the early to mid ’70s, but what do we think of now when we think of that period? Great movies, of course — the golden era of all them Easy Riders and Raging Bulls.

My point is that the empty vessels of any generation, era or time period will always say, “Can we please have more ‘happy’ movies? We need to get away from our cares and woes, which are worse now than usual.” Things are worse now, of course. The economy is a nightmare. But we’re also talking about a pretty weak bunch of people. Folks who always have two or three different kinds of prescription drugs in their bathroom cabinet, gallon-sized Haagen Dazs containers in the freezer, Famous Amos cookies in the food cabinet, etc. I could go on and on.