No offense, but the people who’ve been slamming Gran Torino have their heads up their posterior cavities. Or maybe just broomsticks. They sure don’t seem to understand the legend and the mythology of director-star Clint Eastwood, which is what this film is mainly about (apart from the sections having to do with love, caring, guilt, moral growth and father-son relations). But to watch and fail to get this thing is to admit to a failing — a void — in your own moviegoing heart. Anyone who mocks this film, I mock them back double. 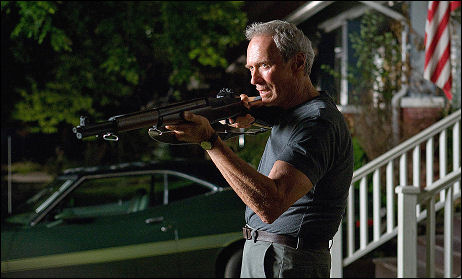 Set in a lower middle-class Detroit neighborhood, Gran Torino is a plain, straight, unpretentious…okay, a tiny bit hokey-here-and-there racial-relations drama by way of an older conservative sensibility — Clint’s, obviously, but also, it seemed to me, John McCain‘s. Get off my lawn, etc. McCain needs to see it and review it for the Huffington Post — seriously. That would be perfect.

It’s an old-fashioned film in that the pacing is gradual and methodical in a good 1962 way, but primarily this is a clean, disciplined, older-guy’s urban western — a kind of growly, sardonic, at times lightly comedic racial-relationship drama. But also a sad and fatalistic Shane movie about a morally compromised guy facing down the baddies at the finale. Light and darkish, brusque and kindly, spitting up blood. Old-guy angst, doubt, warmth, uncertainty, fear-of-death, fear-of-life, family– the whole magillah. What’s to dislike?

Popcorn-wise, this is a doddering Dirty Harry vs. evil-ass gangbangers conflict piece, except it takes its time getting to the Big Showdown parts and there aren’t that many of them to begin with. Like Shane, GT keeps the guns holstered and makes every shot count. 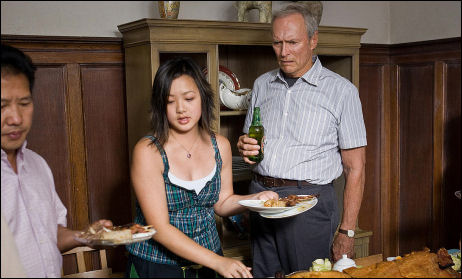 But the confrontation scenes in this vein are awfully damn satisfying because we’re watching the same old Harry, a little weathered but just as fierce as he was nearly 40 years ago, standing up and refusing to take any shit from any cheap-ass punks. But at the same time Walt Kowalski — i.e., Clint’s character — is the kind of guy who’s always letting slight little shafts of light in as he deals with and talks to others. The kind of light, I mean, that comes in odd underhanded ways. Blunt honesty, kindliness, vulnerability, consideration, and tender-gruff father-son conversations, etc. Tough sentiment, but not sentimentality.

Either you get and cherish the Clint thing, or you don’t get and cherish the Clint thing. There’s no third way. Either you understand that he makes films that sound a certain way, share a certain pictorial signature, are cut a certain way and unfold at a certain pace — the same way Unforgiven, Million Dollar Baby, Letters From Iwo Jima, The Bridges of Madison County and all the rest of them played, looked and unfolded — or you don’t understand that.

I understand that. I got it. I admired it. Gran Torino knows itself, is true to itself. And there’s nothing the least bit embarassing or short-fally or Razzie about it. Not in the least. David Poland, hang your head.

Under-30s are advised to stay away. Seriously — you’ll just be wasting your time. Especially younger women. But over 35, over 40 and especially over 50 types are welcome. Guys who’ve been around for the long Clint ride and know what it’s always been about I’ve seen it twice now and GT is about as good as this sort of thing can get. You just have to know what “this sort of thing” really and truly means — the deep-down content and perimeters of it, I mean. 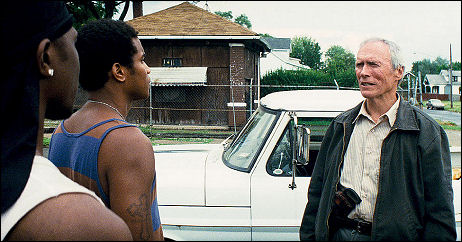 I’ll get into this film again tomorrow, most likely. The other actors, the jokes, the warmth moments — there’s a lot that’s rich and rewarding in this film.

Is Clint’s performance likely to draw a Best Actor nomination? Most likely, yeah. Partly a gold-watch thing, partly for the acting itself. The current inside his acting is quite strong, his whole life running through it. It’ll feel weird if a nomination doesn’t happen — put it that way.