Nothing But The Truth‘s “most striking performance comes from Vera Farmiga, who plays [a] C.I.A. operative called Erica Van Doren,” according to a 12.7 article by N.Y. Times contributor Adam Liptak. 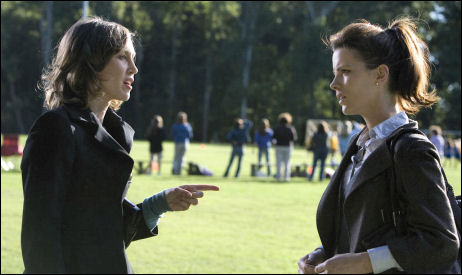 Vera Farmiga (l.), Kate Beckinsale (r.) in Rod Lurie‘s Nothing But The Truth.

“In one scene Van Doren, suspected of leaking her own identity, is given a lie detector test.” So director Rod Lurie, looking to help Farmiga get into the experience, says, ‘We brought in a real polygraphist to polygraph her. [So] he actually connects her up to the machine and asks her, ‘Is your name Erica Van Doren?’ and so on.”

“Lurie thought that would be good for verisimilitude,” Liptak writes. “But it turned out the machine had something to say about the power of Ms. Farmiga’s acting. The polygraph operator, Mr. Lurie recalled, pulled him aside afterward and said, ‘You’re not going to believe this — the machine says she’s telling the truth.'”