Click here before reading the following: Mira Nair’s Amelia (Fox Searchlight, 10.23.09) was research-screened last Wednesday in Pasadena, according to what Nair told L.A. Times/Envelope columnist Scott Feinberg the day before. If anyone saw it (or knows someone who did) and has heard anything at least vaguely encouraging, I’d be curious to hear some particulars. If the word isn’t so hot then forget it, for obvious reasons. 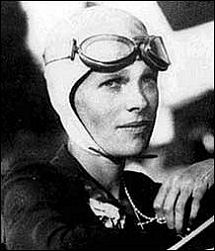 Feinberg writes that “it has long amazed me that there has yet to be a major motion picture about Earhart.” Well, in its time Flight for Freedom, a 1943 RK0 Earheart biopic with Rosalind Russell in the lead and Fred MacMurray as a fictional aviator boyfriend, was considered to be at least moderately major.

Apart from being an early feminist figure admired for her aeronautical dash, Earhart’s legend is largely anchored in the mysterious circumstances surrounding her disappearance and death during an attempt to make a round-the-world flight in 1937. The plane carrying Earhart and co-pilot Fred Noonan disappeared over the central Pacific Ocean near Howland Island.

“Their fates have caused boundless speculation since then,” according to an IMDB summary. “Most likely they ran out of fuel and crashed into the Pacific. In 2000 a shoe was found on an island near Howland, but there was no real evidence it belonged to Amelia or Fred. Attempts to do a thorough undersea exploration for wreckage has not worked out.

“Aside from the obvious solution is the theory that Amelia (a close friend of Eleanor Roosevelt) was on a spy mission against the Japanese, who shot down her plane. A rumor spread in the 1960s that she and Noonan were captured, she was starved or shot and Noonan was beheaded. But attempts to find human remains in the spot they were buried at proved a failure.

“Still the possibility of Amelia dying in the service of the country was always an appealing solution to the mystery. Flight for Freedom was made during the war against the same Japanese in the Pacific. Rosalind Russell has the role based on Amelia, and Fred MacMurray is her ‘Noonan’, except he is not in the plane when she dies. He is around at the end to fight in the Pacific to try to avenge her death.

“It’s not a perfect fit. Howland becomes ‘Gull’ Island in the film. There is no marriage to George Putnam (i.e., Richard Gere‘s character in the Swank film), the publisher who helped Amelia’s literary career. But the film was so obviously built on the career of Earhart and her demise that there was no trouble for an audience to recognize her.

“And even if there is no truth in this solution to her fate, the amount of dislike for the Japanese in the wake of Pearl Harbor, the ‘death march’ at Bataan, and other similar actions, made the solution not only plausible but one that the American movie going public could actually approve of.”