I had a pretty good current going when I tapped out my 12.12 pan of The Day The Earth Stood Still. But my Seven Pounds review hasn’t panned out at all, in large part because I’m not allowed to talk about the basic shot — i.e., the climactic third-act revelation that tells viewers what Will Smith‘s character has actually been up to, which has been kept obscure throughout 98% of the film. 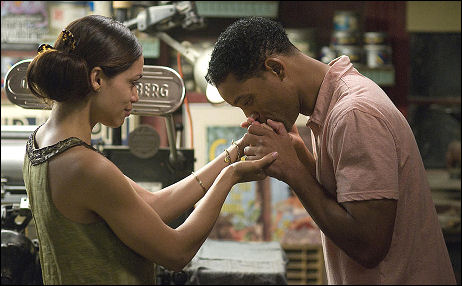 Unless the viewer has simply read the IMDB reader comments about the plot particulars, which have been sitting there plain as day for many months.

Seven Pounds is about a guy played by Will Smith trying to make amends, save himself, save others, find redemption, etc. An important third-act component is a big white jellyfish. Suffice that there’s a satirical Seven Pounds poster, inspired by one for Seven Brides for Seven Brothers, on my back-up drive that I’d like to post some day.

I saw Seven Pounds in the company of former Fox News entertainment guy and stand-up comedian Bill McCuddy. We were sitting maybe three feet apart in the 7th floor Sony screening room with no one else around, but just for fun we began texting each other with impressions as the film went along and got worse and worse. About 45 minutes in McCuddy wrote, “If only Smith could save this movie.”

Always be suspicious when a big movie star plays a nice guy looking to help people who need it. Especially if the good guy is played by a guy with perfect white teeth who writes checks for Scientology. Double-especially if the fictional do-gooder has decided to limit his largesse to a specific number of recipients (which automatically indicates an overly schematic and precious mentality), in this case seven. And triple-especially if the doer of good things has chosen the recipients based on a judgment call — upon his personal reckoning that they “deserve” it. 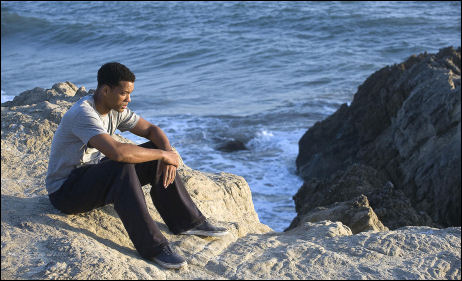 I’ve always disliked the word “deserve.” Nobody ever deserves anything except for the fee or salary that they’ve earned with good respectable work. But nobody deserves anything in the greater sense of the term — to live or die, to become rich or not, to have a pleasant or unpleasant life. Life has always happened without moral rhyme or reason or any sense of justice or fairness, certainly without a cosmic entity deciding that this or that should or shouldn’t happen because the people involved “deserve” their fate.

The characters who’ve been chosen to receive Smith’s help, according to the Seven Pounds merit-badge system, are in their own way centered, fair-minded, even-mannered — people with kindly, positive, compassionate attitudes who — I can certainly reveal this much — are between a rock and a hard place health-wise.

I don’t agree with arbitrary decisions about this or that person’s moral, humanistic worth. As long as Smith is playing a guy engaged in a kind of Christ-like endeavor (despite his motive being primarily about self-redemption), why not adopt Christ’s attitude during his time on earth about spending time with the sinners on the theory that they need his help more than the morally disciplined? This movie would have a lot better if Smith had gone this route and decided to help only scumbags, criminals, drug users and the like.

McCuddy wrote me a day after the screening with this thought: “Think how much better Seven Pounds might might might have been without Smith’s baggage. For once the well-oiled Smith machine actually takes away from what could have perhaps been a gut-wrenching little indie starring a bunch of unknowns.”

McCuddy also came up with the title of this piece — “Organ Grinder.”