I’m sorry, but when Rep. Gary Ackerman essentially called Caroline Kennedy the Democratic Sarah Palin, a voice within begrudgingly admitted that he wasn’t far off. Kennedy has been acting way too timid and reclusive and un-Kennedy-like to be handed Hilary Clinton‘s Senate seat. She just doesn’t have the strength of character that people generally want from a big-time legislator, let alone one with her lineage and last name. 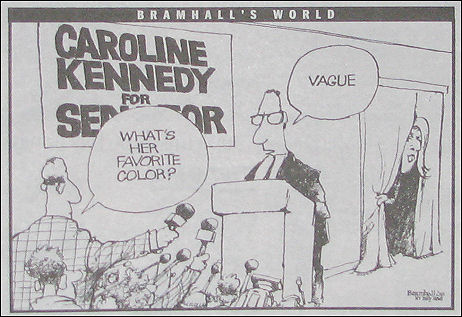 The lady is clearly unwilling to intellectually engage off the cuff. She seems wimpy. She lacks pizazz. I’m not detecting any serious gumption or intestinal fortitude. There’s absolutely none of that Chris Matthews quality in her at all…none of that basic back-slapping, yaw-haw, gregarious, chug-a-brewski-with-the-proles quality that a good politician is supposed to have or at least simulate on the campaign trail.

Between the Palin comparison, her hide-away “listening tour” of upper New York State and recently declining to release her financial background, I think Kennedy should just pack it in. She doesn’t have it. I love the idea of a strong, bright, compassionate woman with a marquee name serving as New York’s Senator, but Kennedy doesn’t seem to have the ability to stand the heat in the kitchen, and I really do think she’s done at this point because of this.

Ackerman said “Kennedy’s name and family wouldn’t, and shouldn’t, be enough to get her appointed to the U.S. Senate seat that Hillary Rodham Clinton will vacate once she is sworn in as secretary of state. Everyone knows who she is, but I’m not sure what she is. Eventually she has to get in the ring and face the public.'”