“If Gran Torino does prove to be Clint Eastwood‘s acting swan song, he couldn’t have picked a better way to go out,” writes Pete Hammond in his latest “Notes on a Season” column. “As a grizzled, racist, foul-mouthed ex-Marine refusing to move from an old neighborhood now populated with Asians and overrun by gangs, Eastwood summons up memories from his past roles. Indeed, he’s channeled his whole screen persona. 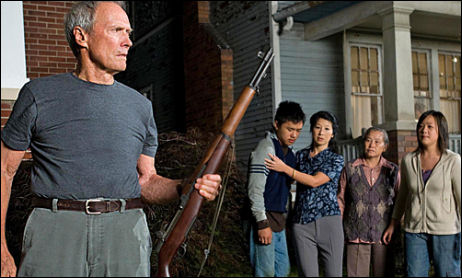 “As his character stands in front of his house pointing his gun at a group of young toughs and utters lines like ‘Get off of my lawn’ — John McCain! — “or ‘Did you ever think you would be [expletive] with the wrong guy,’ you could almost see what Harry Callahan would be like when he hit retirement age.

“Gran Torino‘s Walt Kowalski is a proud man who squints and grunts and, like a descendant of some reluctant Western sheriff, takes a town now bullied by ‘outlaw’ Latino, Asian and black gangs and tears them a new one. Giving real dimension to what could have been an unlikeable Archie Bunker-style bigot, not to mention heart and a 21st century enlightenment that we all have to live together, Eastwood has taken Dirty Harry to a new place and delivered the ultimate valedictory.

“When he croaks the lyrics of the title song (co-written by son Kyle) over the end credits, audiences will be applauding not just a fine performance but also a remarkable screen career.”