The reasons for the disappearance of Jennifer Seitz, the 36 year-old Florida woman who went over the side of a cruise ship off the coast of Cancun last Friday night, were speculated upon by an MSNBC guest commentator a few minutes ago. 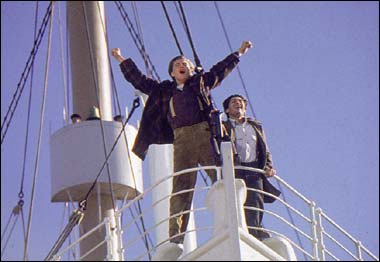 The one that got me was the Titanic scenario — i.e., an allegation that lots and lots of drunken cruise ship passengers over the years have gotten bombed and then staggered out to the bow section and done Leonardo DiCaprio’s “I’m the king of the world!” routine (standing on the rails, beating their chests and screaming) and then lost their balance and fallen over.

If I had done that in a state of total drunkenness and fallen into the sea and been fished out and lived, I would’ve called my attorney the next day and sued the pants off director-writer James Cameron, DiCaprio, 20th Century Fox, Bill Mechanic, Jon Landau , Paramount and anyone else who had anything to do with that 1997 film. Yes, I’m kidding.

That king-of-the-world stunt is an alpha male thing, no? What 36 year-old woman in her right mind would do that? I think Seitz’s husband…I don’t know anything. But we all suspect the same thing, don’t we? She goes over the side around 8 pm, he goes off and fucking gambles and then waits eight hours to report that she’s missing? As Willem Dafoe‘s Jesus says about God’s intentions in The Last Temptation of Christ , “I think he wants to push me over !”