Two weeks ago I met Revolutionary Road costar Michael Shannon, whose brief but quite breathtaking performance in that film ought to win him the Best Supporting Actor Oscar. It happened in Tribeca. I was told by his publicist that photography couldn’t happen, and then we sat down in a restaurant that was too noisy for the recording of our chat to be of any value. 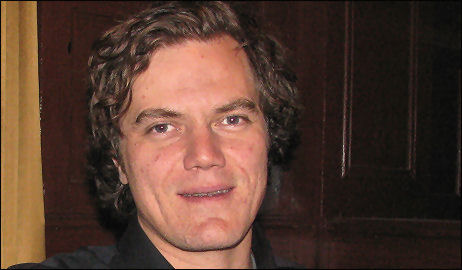 Not having anything to work with prompted a bit of a delay in writing this piece, but at least I’ve gotten around to it. It certainly wasn’t for a lack of enthusiasm or fascination with Shannon, who’s a very intriguing piece of work.

I’m a bit angry that none of the critics groups or kiss-ass groups (BFCA, HFPA, NBR) have given Shannon a Best Supporting Actor award or nomination. He’s totally brilliant and hilarious as the nutjob mathematician who spells out exactly (if uncomfortably) what’s going on between the film’s unhappy married couple, Frank and April Wheeler, portrayed by the excellent Leonardo DiCaprio and Kate Winslet.

Shannon’s Road turn registers in nearly the same way that Heath Ledger ‘s does in The Dark Knight, as both give portrayals of truth-telling loons. The difference is that Shannon, playing a period character, is quieter, more concentrated and buttoned-down. And of course, far less showy. But no less bull’s eye.

Shannon is a very cool, free-thinking fellow. My son Jett (who sat with us) liked him alot but thought his eyes looked a bit scary. Naaah, I said — more like the eyes of a 16 year-old kid who’s very bright and perceptive but isn’t 100% sure who he is or what he’s up against. A guy who doesn’t have it all worked out but is open about that, which is a very good thing from the perspective of a watcher or listener.

For me Shannon is a cross between ’50s poet-adventurer Neal Cassady and the prophet Elijah in Herman Melville‘s Moby Dick, only a bit more vivid in that he seems to be really and truly living in his own realm.

I asked him at one point if he owns a Blu-ray player, and he talked about how the name Blu-ray sounds a little spooky, like “some kind of sea animal” — a blue sea monster that can kill with a single strike of its tail, say. Talk to 100 people about Blu-Ray and 99 of them will talk about the picture quality or how they’d love to finally buy one or whatever. Only one in 100, maybe one out of 1000, will answer the way Shannon did.

When Shannon was answering a question in front of a Screen Actors Guild audience following a Revolutionary Road screening a couple of weeks earlier, he spoke as if he was in a kitchen and talking to some guy standing nearby as he’s fishing through the freezer and looking for ice cream. He doesn’t give a performed answer, in other words — he speaks like a regular guy talking about how he worked on his car’s brake lining the other day and needs to go back and finish the job. Nothing to prove or put across. Just the facts.

Shannon’s next job is Werner Herzog‘s My Son, My Son, What Have Ye Done?, which will begin shooting next month. The first phase of filming will go from January12th to 20th. This will keep Shannon away, unfortunately, from the ’09 Sundance Film Festival, where two of his unseen films will be showing. He’d like to go, he says, but duty calls.

The Sundance film Shannon is especially proud of, he says, is Noah Buschel ‘s The Missing Person . Shannon plays a private detective looking for a guy who’s ostensibly disappeared on a train from Chicago to Los Angeles, but then it is gradually learned that the cause of the disappearance was something else entirely. The film costars Amy Ryan. 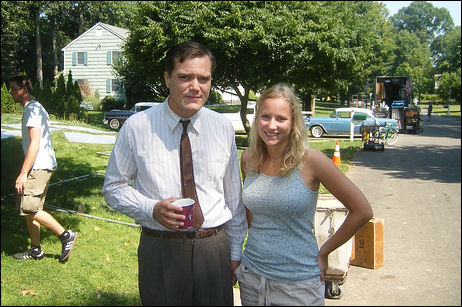 Shannon and a woman I can’t identify, between shots on Revolutionary Road.

The other is Shana Feste‘s The Greatest, a drama about a family coping with a son who’s been killed in a car crash and the young girl who is carrying the son’s child. Susan Sarandon and Pierce Brosnan play the grieving mom and dad; Shannon plays the other driver.

Shannon is only 34 (same age as Leonardo DiCaprio), but he’s been acting in films since 1992, when he was only 18. He played bit and character parts throughout the ’90s and the early ’00s. Two of his smaller roles that I remember with some clarity are cock-eyed military types in Joel Schumacher‘s Tigerland and Michael Bay ‘s Pearl Harbor.

Shannon’s attention-getting breakout came in ’06 when he starred in William Friedkin ‘s Bug, an upscale horror film that I’ve never seen. (Apologies.) Then he played the savior of the two buried guys in Oliver Stone‘s World Trade Center — the guy who leaves his job in Wilton, Connecticut, on 9/11, puts on his military clothes and drives into Manhattan to help pick through the rubble and help out any way he can.

Shannon’s next punch-through came when he played a cold-eyed nogoodnik looking to scam or rip-off Ethan Hawke in Sidney Lumet‘s Before The Devil Knows You’re Dead.

Shannon began his career as a stage actor in Chicago, where he helped found A Red Orchid Theatre and has also worked with Steppenwolf Theatre Company and the Northlight Theatre. He currently lives in the Red Hook area of Brooklyn with his wife (or perhaps just his girlfriend), actress Kate Arrington, a Steppenwolf ensemble member . They have a daughter, according to his Wikipedia bio page.