I got out of a 3 pm showing of The Day The Earth Stood Still only about 30 minutes ago so forgive my being slow to respond to the news about Andrew Stanton‘s WALL*E winning the Best Picture prize from the L.A.Film Critics earlier today. Waahhhlleeeee! Big development, you bet. 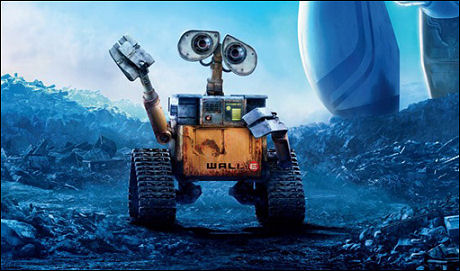 It’s a good decision born of bold and original thinking. Hooray for LAFCA not putting its paws up and yelping for Slumdog Millionaire. They stood up and shot their own wad.

Right now, today, as of this precise minute, the Slumdog juggernaut is idling in traffic, stopped at a red light, and just a tiny bit worried. I wouldn’t be. Things will pick right up again tomorrow for Slumdog once the unusual WALL*E win — the first-ever animated pic to win LAFCA’s Best Picture award — is processed and kicked around. But at least today’s surprise win has given the Best Picture race a little contour, a little shading, a little “oh, yeah?” attitude.

The Dark Knight was the Best Picture runner-up. Honestly? It would been a little bit cooler if Chris Nolan‘s film had won instead of Stanton’s. WALL*E, trust me, isn’t going to bust into the Academy’s Best Picture race, but The Dark Knight might, and it could’ve used LAFCA’s support to pursue this. But what does LAFCA care about the stupid Academy? Nothing. They’re playing their own game.

LAFCA’s Best Director trophy went to Slumdog‘s Danny Boyle . It’s a sop, of course — a make-up for the disappointed Slumdog contingent. But as long as LAFCA was going off the script they should have at least given the Best Director prize to Nolan, who was first runner-up after Boyle.

This columnist recognizes that Sally Hawkins‘ performance in Happy-Go-Lucky was crackling and throbbing and gifted-crazy, but the kind of person she played — a happy fascist who insists on happy-vibing everyone she runs into until they’re down on their knees and begging for mercy– is the sort of positive soul I find personally detestable, so I say “no” to this in order to discourage all of the other happy fascists, both in other forthcoming movies and in real life.

The Best Supporting Actor prize went to The Dark Knight‘s Heath Ledger, and Happy Go Lucky‘s Eddie Marsan, whose performance I enjoyed much more than the one given by Hawkins, was named runner-up.

Here are the rest of the awards.