Lone Scherfig‘s An Education, a coming-of-age period drama set in 1961 London, is the absolute shit — the best film of the Sundance Film Festival, a finely tuned and deeply engaging film by regular popcorn-watching standards, an award-calibre drama that will definitely be in contention at the end of the year, and a movie that has launched a genuine movie star in an old-fashioned and yet very new-fashioned sense — 23 year-old Carey Mulligan. 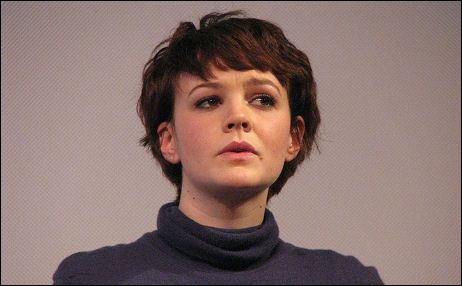 I know that special old-soul-mixed-with-youthful-effervescence quality that you see in very few actors and actresses over the years, and trust me, Mulligan has it. A wondrously true and satisfying film has broken out of the Sundance ’09 pack, and a brand-new actress with just the right face and just the right approach and precisely the right touch of sadness in the corners of her mouth has hit one out of the park.

If I was a buyer I would have left the theatre at the 45 minute mark and started offering whatever it takes. When a movie works this well you don’t need to see the whole thing. You want to see it all, of course, but you know five minutes in that it knows what it’s doing and is playing the tune with just the right pitch and calibration.

It helps greatly that An Education is a sublime coming-of-age piece that’s been directed with fine assurance by Scherfig (Italian for Beginners) and that it has a wonderfully tart and wise and natural-sounding script by Nick Hornby. And that it also has a perfect cast that includes Peter Sarsgaard, Dominic Cooper, Alfred Molina, Cara Seymour, Olivia Williams and Emma Thompson . But it all rests squarely on Mulligan’s shoulders, and she keeps it fully aloft for its 95 minute length. 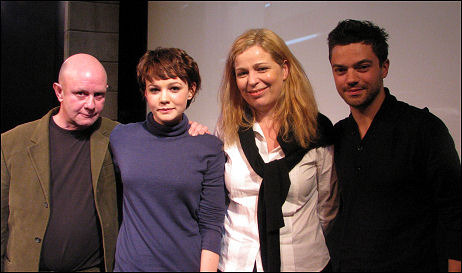 Within two or three minutes I knew I was watching someone extraordinary. Mulligan’s Jenny is a very bright and vivacious 16 year-old living a somewhat stifled, middle-class life and pinning her hopes on being admitted to Oxford University. She is spirited but not daffy, off-beautiful and clearly wise beyond her years. What’s extra-special about Mulligan is that she possesses — in this film, at least — a perky A-student Audrey Hepburn quality that makes you fall for her at the drop of a hat.

The odd thing is that An Education is set at a time when Ms. Hepburn’s career was going great guns, and it has a special made-in-the-60s quality — you’re thinking right away that John Schlesinger of 1965 or ’66 could have directed it, or Francois Truffaut — that is quite intoxicating. It sort of allows you think that you’re watching it in the ’60s, and that the very-new-to-the-scene Mulligan is about to knock Hepburn off her pedestal because she has the same kind of pluck but a lot more soul and melancholy in her eyes.

The story is about how Jenny, bored to years by her suburban existence, is instantly smitten by a much older but very urbane and amusing guy, David (Sarsgaard), in part because he brings so much in the way of excitement and sophistication into her life. A bit of a rascal and a con artist and yet a man of taste with a sense of real fun, David half-persuades but more often hoodwinks Jenny’s parents (Molina, Seymour) into letting him take her to this and that concert, art auction, grand party or late-night dinner with his two lah-lah friends, played by Cooper and Rosemund Pike. 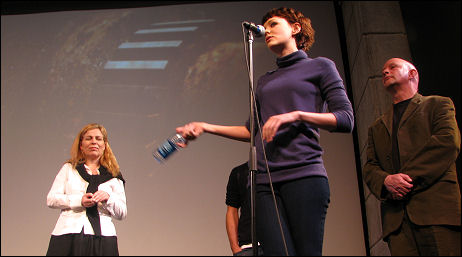 David essentially becomes Jenny’s new teacher — her escort-guide into a glam but shady world whose true nature and agenda reveals itself only very gradually. But when it becomes clear…well, let’s spare the details for now but it’s a serious breath-taker. But our Jenny is no basket case waiting to crumble. The fact that she’s strong, bright and focused is one of the pleasures of her character. There’s never any worries on that score.

An Education, trust me, will be announced as a Fox Searchlight or Focus Features or Sony Pictures Classics acquisition within hours. Okay, by tomorrow.

Doug Pray‘s Art & Copy turned out to be a little thin. It’s basically a chapter-by-chapter history of the most legendary ad campaigns of the last 45 or 50 years, each chapter with a corresponding flattering profile of the advertising exec (or execs) who dreamt each one up.

But there’s no arching theme to it, no undercurrent, no inquiring line of thought. Pray doesn’t begin to think about the odious implications of modern advertising (as Adam Curtis did in The Century of the Self). Nor does he think to draw parallels between certain legendary ad copy lines and the contours and tendencies of the culture from which they sprung.

One example of this was pointed out by Tom Wolfe in his legendary 1976 essay “The Me Decade and the Third Great Awakening.” In 1961 a copywriter in the employ of Foote, Cone & Belding named Shirley Polykoff came up with the line: “If I’ve only one life, let me live it as a blonde!” The basic attitude of having “only one life,” said Wolfe, contradicted a general belief among families and nations that had existed for centuries, which you could sum up as a belief in “serial immortality.”

Boiled down, serial immortality means that we’re all part of a familial stream — our lives being a completion or fulfillment of our parents’ lives and our children’s lives completing and fulflling our own, and everyone understanding that we’re part of the same genetic river of existence and spirit. Polykoff’s copy line, which was written for Clairol hair coloring, basically said “the hell with that — it’s just me, it’s just my life and my goals, and I’m going to satisfy myself!” By the time the early ’70s rolled around the culture had begun to believe in the “me first” philosophy en masse.

I just wish Pray had decided to dig into this and other correlations between advertising and cultural values.

I’m about to see Duncan Jones‘ Moon at the Yarrow. Then comes Lone Scherfig‘s An Education at 3 pm at the Egyptian, and then 500 Days of Summer, a Fox Searchlight film, at 7:15 pm. I don’t know how to do all this and get in the writing time. I don’t know how to do the writing and see the right films. I do know that items like this are boring to read. I’ll try and post sometime between 5 and 7 pm today.

If you’re trying to see a film at the Yarrow hotel press-and-industry theatre, you have to go into this tent and wait. Okay, you can always rebel and refuse (as I did last night) but most people submit. It’s not some terrible indignity, but it does feel like a stockyard pen inside. 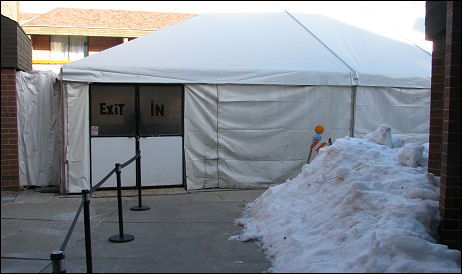 Ben Affleck is the exec producer of Eric Daniel Metzgar‘s Reporter, a deeply stirring and yet dispiriting doc about Pulitzer Prize-winning N.Y. Times reporter Nicholas Kristof. It was curious, I thought, that interviews with Kristof and Metzgar were offered yesterday but not one with Affleck. He’s the headliner, right? Whatever.

The doc, which I saw late yesterday afternoon, focuses on two very threatening and frustrating situations — the gradual eclipsing of traditional print journalism institutions like the Times, which supports the kind of vital, first-hand political-humanitarian reporting that Kristof has delivering since the early ’90s, and the relentless brutalizing and murdering of innocents in war-torn places like Darfur and Congo.

Solemn and bracing as Reporter is, it brings about a realization, one that sinks in deeper and deeper with accompanying feelings of gloom, that yes, measures can be taken to try and remedy or partially stem these situations, but the basic likelihood is that newspapers will continue to die, Kristof-level reporting about injustices and atrocities will start to become less frequent and gradually perhaps even rare, and poor people will continue to suffer horribly at the hands of tyrants. And you’re sitting there in the audience going “uhhhnn…well, we’re fucked. Me included.”

The world is for the few, and the things that bad people with guns and machetes and other such tools routinely do to people without protection is beyond appalling. Once you open yourself up to it, there’s no end to feeling sickened and disgusted by the inhumanity and the horror out there.

I came out of the film wanting to re-reading Kristof’s Times reporting. I’m also telling HE readers about it by way of a recommendation. I’m very glad I saw Reporter. It’s very well made and sadder than hell. 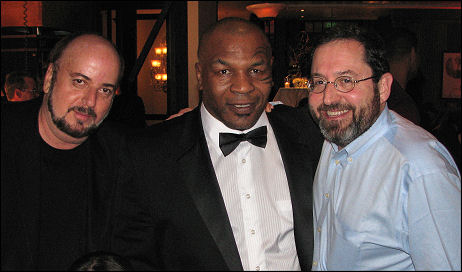 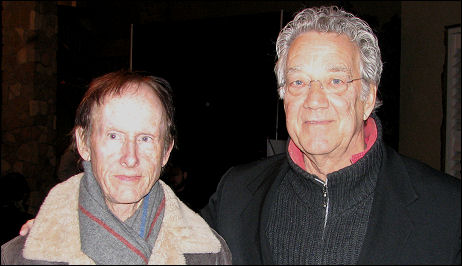 Ran into, spoke briefly with Doors guitarist Robby Krieger and keyboardist Ray Manzarek yesterday afternoon at the Yarrow hotel. They were on their way out to the Temple theatre for a screening of Tom DeCillo’s When You’re Strange, the Doors doc that I reviewed on Thursday. 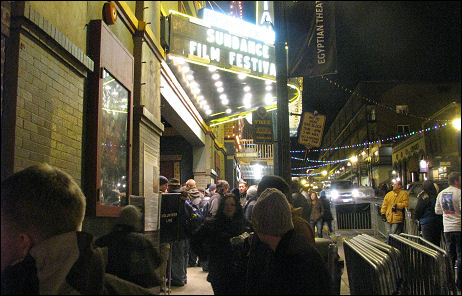 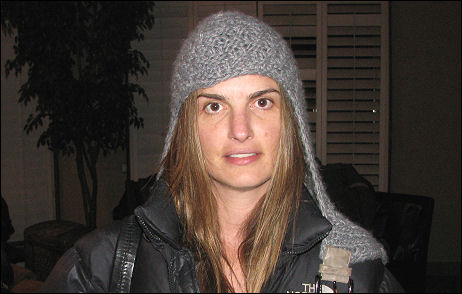 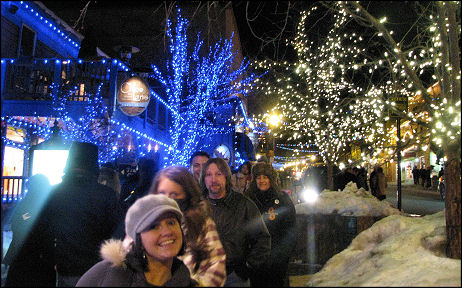 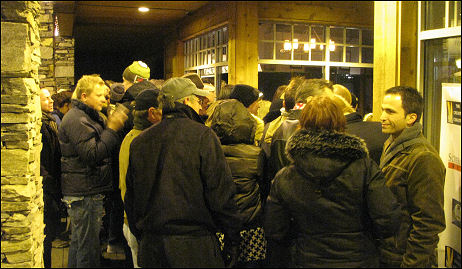 A Sundance “pigfuck” is defined as any loud overcrowded party with even more people gathered at the front door looking to get in. For some it’s a point of pride to never attempt entrance to such an event. Okay, for me it is.
January 18, 2009 6:37 amby Jeffrey Wells